The “Big Apple” was home to the Hyundai Hope on Wheels 20 Year Celebration at the NY International Auto Show. Like most exhibits this was an exclusive meet and greet for car brands and their clients. But Hyundai took this opportunity to showcase to the consumers that they are more than just a car brand but a company that encompasses social impact and preparing for the future. 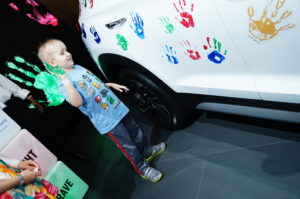 Did you know since 1998 Hyundai and its U.S. dealers, HHOW is one of the longest continuously running CSR initiatives in the auto industry and is dedicated to helping kids fight cancer.

Approximately 15,000 children are diagnosed with cancer each year in the U.S. This year HHOW travels the nation in a Hyundai Santa Fe – the official hope vehicle, to the children’s hospital grant winners. The vehicle serves as a canvas for hope, covered with handprints collected from children across the country battling this disease.

The Culture Supplier is honored to partner with Hyundai Hope on Wheels to continue to spread awareness about pediatric cancer .