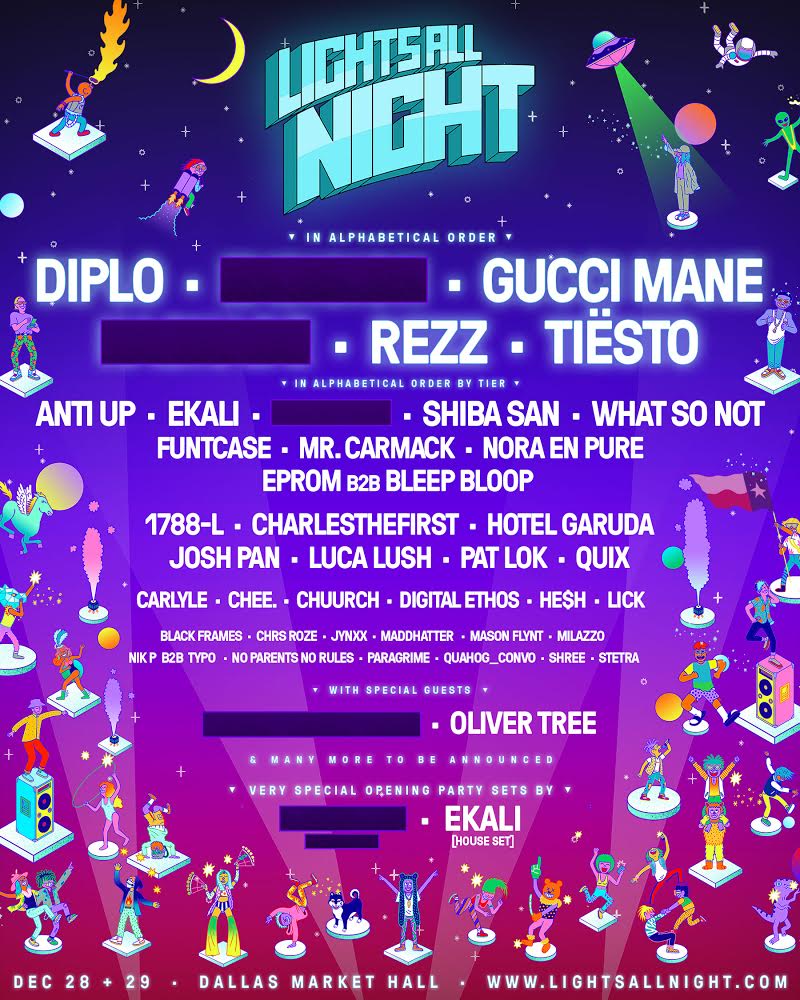 Lights All Night, one of the longest running end-of-year music festivals in the country, is excited to officially announce Phase 1 of the music lineup for this year’s two-day event, which is set to return to Dallas Market Hall in Dallas, Texas on Friday and Saturday, December 28 and 29 of New Year’s Eve weekend. Two-day GA and VIP tickets are on sale now at www.lightsallnight.com.

Lights All Night (LAN) will once again welcome to its stages some of the world’s most sought-after music acts for a truly memorable celebration to close out 2018. LAN will play host to perennial chart-topping producer Diplo, who released his new star-studded California EP this past March, and who continues to prep for the long-awaited release of his new collaborative disco album featuring Mark Ronson. Ronson, together with Diplo, form the super-DJ duo Silk City. Also hitting the stage will be Atlanta’s most beloved trap-rapper and New York Times best-selling author Gucci Mane.

Additional headlining performers at LAN 2018 include one of the most successful DJ’s of all time, the Grammy Award-winning and oft-labeled “Godfather of EDM” Tiësto, who released his latest effort, I Like It Loud (EP), this past March to rave reviews from fans and critics alike. Canadian-born Rezz will also be headlining the main stage this year in support of her most recent album, Certain Kind of Magic, released this August as a follow-up to her 2017 debut album Mass Manipulation, which won the highly-coveted “Best Electronic Album” at the 2018 Juno Awards.

Other notable Phase 1 acts set to perform include What So Not, who just released his debut album, Not All the Beautiful Things, in March; Mr. Carmack, a musical pioneer hailing from the West Coast who fuses bouncing hip-hop beats with mellow, laid-back EDM; QUIX; Shiba San; and a very special collaborative performance featuring Eprom B2B (back-to-back) Bleep Bloop. Acts like 1788-L, Anti Up, Ekali; Funtcase; Hotel Garuda; Luca Lush; Oliver Tree; Charlesthefirst, Pat Look, Church; and more round out Phase 1 of the 2018 music lineup.

Two-day GA and VIP tickets are on sale now at www.lightsallnight.com. Weekend GA passes are available for purchase for $109.95, while weekend VIP passes cost just $229.95. VIP ticket-holders will have access to the utmost festival-going experience with perks including the Lights All Night Pre-Party, preferred viewing areas at the festival, expedited entry, exclusive VIP bars, private restroom facilities, onsite event hosts, and more. For those looking to take their year-end celebrations to the next level, several Bottle Service Packages are available for purchase ranging in price from $1,400 to $2,500. Those interested in reserving a private table featuring bottle service, along with a dedicated concierge and server, are encouraged to contact LAN directly at vip@lightsallnight.com. Interested VIP and Bottle Service patrons are encouraged to purchase now, as supply is limited and prices will increase as the festival date approaches.

Additionally, LAN has introduced two brand new ticket options for festival-goers, both of which are available for sale now on the festival website. Express Entry offers ticketholders the opportunity to skip the GA line with dedicated and expedited entry. Another new ticket option is the Pre-Party + Express Entry, which, in addition to guaranteeing access to the Express Entry lane throughout the weekend, allows patrons festival entry one hour before doors open to experience a special DJ set with Ekali on one night and a massive surprise guest on the other night. Ticketholders will also be able to explore the grounds and check out the ever-evolving main stage designs, and will have the opportunity to claim coveted viewing locations. These will be the very first fans to enjoy the festival’s food and drink offerings before doors open to the public.

After a successful and well-received update to the festival layout last year, the event site in Dallas Market Hall will expand once again to now feature four stages total, thanks to the addition of two brand new stages at this year’s event. More details regarding Lights All Night 2018’s layout and design, including information surrounding art installations and stage production, will be revealed closer to the festival dates.

Fans at LAN 2018 can once again expect an unforgettable weekend filled with awe-inspiring performances and top-of-the-line production for a truly memorable start to 2019. This year’s event will return to Dallas Market Hall, located just minutes from downtown Dallas after first playing host to LAN in 2015. As in previous years, LAN will include two large outdoor areas, as well as some of the best food vendors in the DFW area and multiple free water stations throughout the expanded facility.

LAN celebrated its eighth event last NYE weekend with a third consecutive year at Dallas Market Hall and more than 30,000 fans in attendance at the two-day sold-out event in Dallas. In 2017, LAN once again offered festival-goers of all ages access to some of today’s top electronic and hip-hop acts across the globe, including Bassnectar, Marshmello, Porter Robinson, Illenium, Seven Lions, NGHTMRE, Ugly God, Smokepurpp and more.

Additional details surrounding the ninth annual event in will be announced in the coming weeks, including the full music lineup, single-day tickets, and the daily performance schedule, as well as the lineup of vendors, merchants, and visual artists slated to be onsite throughout the weekend. For more information and to stay up to date on all LAN news and announcements, please visit the following channels:

ABOUT LIGHTS ALL NIGHT PRESENTS: