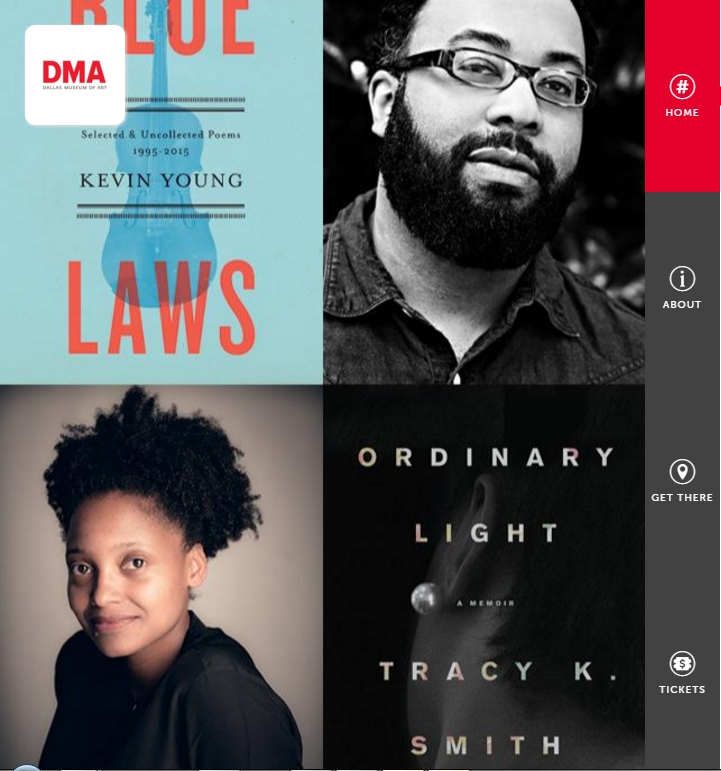 Tracy K. Smith won the 2012 Pulitzer Prize for Poetry for Life on Mars. Her critically acclaimed memoirOrdinary Light is shortlisted for the 2015 National Book Award in Nonfiction. After spending a summer in Alabama at her grandmother’s house, Smith returned to California with a new sense of what it means to be black. Kevin Young is widely regarded as one of the leading poets of his generation, one who finds inspiration in African American music, particularly the blues, and in the bittersweet history of Black America. Young’s latest compendium Blue Laws: Selected & Uncollected Poems 1995-2015 draws from all nine of his previously published collections and includes new poems as well.

Arts & Letters Live tickets are non-refundable. If you will not be able to attend, please let us know in advance by calling (214) 922-1818 or email ArtsandLettersLive@dma.org. Tickets released by 3:00 PM on the day of the event will be considered a tax-deductible contribution to the DMA, and you will receive a letter of acknowledgement for your tax files.
+ Google Calendar+ iCal Export