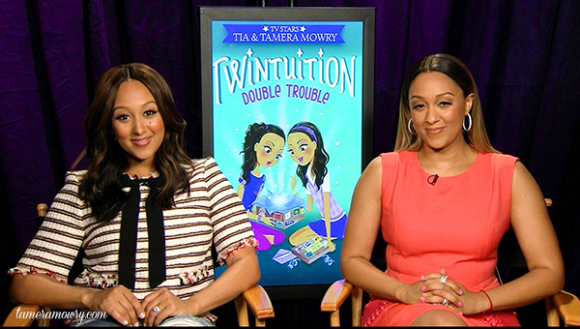 Tia Mowry-Hardict and Tamera Mowry-Housely have been a house hold name since the early 90’s. From Sister, Sister, to The Game and Instant Mom, the Mowry’s are looking better than ever…and hoping for a primetime spot on your bookshelf! They teamed up with HarperCollins Children’s books to create a book series— Twintuition. Characters, Caitlyn and Cassie, are twins who are forced to move to a new town and neither of them are too happy about it. With their birthday coming, they start having strange visions, that surprisingly start coming true. When the visions get serious, they must work together to change the future before it can happen.

Tia and Tamera were inspired from none other than motherhood. Having their own children, along with a love of reading, it was “time to do something different creatively…We’ve done movies together, we’ve done televisions shows together, so why not write a book… it’s the right time”, said Tia in an interview with Fox43.

The series is geared toward tweens, but it is a book all ages can enjoy. They have since released their young adult books of the series Twintuition. Double Vision, hit the shelves in mid 2015 and the second book of the series, Double Trouble,  was released May 10, 2016. Both books are available at major retailers, independent book stores, e-readers and amazon.com.

Double Trouble comes out just in time for summer readers, grab yours while you can!

Tia is married to actor, Cory Hardict and they have one child together, Cree Hardict. Tia is currently on the Cooking Channel as host of Tia Mowry at Home. Catch new episodes Saturdays at 3pm ET.

Tamera is married to FOX news correspondent, Adam Housely and they have two children together, Aiden and Ariah Housely. Tamera  is producer and co-host of The Real daytime talk show. You can catch it at 8 and 11AM PT on FOX 4.

You can win a signed copy of the Double Trouble here!

Load More... Follow on Instagram
The Real Story Behind The Running Man Challenge
The TOP Slang Words From Around The World – US, Canada and More
To Top