“It can happen to you…” – Rushion McDonald

“Guilty Until Proven Innocent” is pretty much the standard in our 2018 criminal justice system.

Imagine hanging out with your Bae all weekend and then a week later you’re arrested for a murder that was committed 40 miles away in another state. You know you’re innocent, Bae knows you’re innocent, witnesses provided your alibi, yet you’re still booked, charged, and sentenced for murder.

This has been the reality of thousands of men and women across this “great” country we call America. According to a study conducted by the University of Michigan, “As of October 15, 2016, the National Registry of Exonerations listed 1,900 defendants who were convicted of crimes and later exonerated because they were innocent; 47% of them were African Americans, three times their rate in the population. About 1,900 additional innocent defendants who had been framed and convicted of crimes in 15 large-scale police scandals were cleared in “group exonerations;” the great majority of those defendants were also black. Judging from the cases we know, a substantial majority of innocent people who are convicted of crimes in the United States are African Americans.”

What would you do if you were sentenced to 27 years for a crime you didn’t commit? 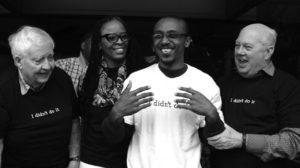 This is the reality of many young men and women that look just like you. It could LITERALLY be any of us.

Thankfully there are individuals and organizations leading the charge to changing policies, training attorneys, informing jurors, and encouraging families to continue the fight. Civil Right’s Attorney Benjamin Crump (lead attorney for the families of Trayvon Martin, Michael Brown, and Alesia Thomas) has dedicated his career to bringing justice to those who are marginalized by the legal system. He has teamed up with award winning producer Rushion McDonald (The Steve Harvey Show, Jamie Foxx, Think Like A Man) of 3815 Media, Jupiter Entertainment, The Innocence Project, and TV One to host a new limited crime and justice series, EVIDENCE OF INNOCENCE.

What Does Attorney Crump Think of Kim Khardasian and Prison Reform?

JOIN THE CONVERSATION – Tune in to TV One every MONDAY in June, starting June 4 at 9PM CST/10 PM EST for the unbelievable stories of survivors (via TV One Press release):

When her ex-girlfriend is brutally murdered in a public park in Portland, Oregon, Lisa Roberts immediately becomes the prime suspect. Lisa and her ex were part of a love triangle with another woman that had turned violent in the past. Lisa swears that she is innocent, and she even has an alibi. But when prosecutors discover cell phone evidence that they claim proves Lisa was at the scene of the crime, they give her two options: either plead guilty to manslaughter, or go to trial and risk life in prison. Terrified at the thought of dying behind bars, Lisa takes the plea. Sentenced to 15 years, she begins fighting for her freedom from inside a cell. But who will believe an innocent woman pled guilty to a murder she didn’t commit?

A drug deal gone wrong leads to a shootout in the streets of Springfield, MA that leaves an innocent bystander dead. Witnesses ID the shooter as Mark Schand, a one-time street hustler who’s gone straight. Mark wasn’t even in Massachusetts that night. He was in Hartford, CT with his pregnant wife. But investigators ignore his alibi, and charge him with murder. At trial, multiple witnesses point him out in court as the killer. The jury believes them, and sends Mark Schand to prison for the rest of his life. Buoyed by his wife’s undying love, he refuses to stop fighting. Can he and an all-star legal team find the real killers, and prove that authorities colluded to put an innocent man behind bars?

19-year-old Richard Miles was walking home one night in 1994 when he was suddenly surrounded by police and inexplicably accused of murder. After a swift conviction, he was sentenced to life in the Texas Department of Corrections. There, his faith was tested as he learned the harsh realities of the legal system. With the help of his father, the guidance of a prison mentor, and the strength of his religious principles, Richard continued his fight for freedom on the inside. After more than a decade behind bars, Richard found hope in wrongful conviction nonprofit Centurion Ministries, which made a commitment to vindicate him. But would that be enough in the eyes of the highest court in Texas? Or would Richard remain behind bars forever?

In 2004, Melonie Ware realized her dream of running a daycare facility from her home. But when an infant mysteriously dies in her care, her life spirals out of control. Doctors and police say Melonie killed the child in a fit of rage. Her own defense attorney even has reservations about her innocence, and refuses to believe her version of events. The jury refuses as well, and sentences Melonie to life in behind bars. Now incarcerated, her fellow prison inmates terrorize her as a child killer. Unwilling to let his wife suffer in this living hell, Melonie’s husband risks the family’s life savings to overturn her conviction. But with prosecutors determined to keep her in jail, will Melonie ever see freedom?