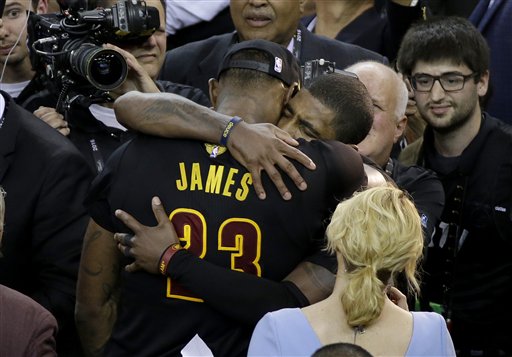 More tears. Only this time, tears of joy.

Cleveland’s championship drought, crossing 52 years, generations and noted by a long list of near misses, is over at last.

On Father’s Day, LeBron James, the kid from nearby Akron raised by a single mother, brought the title home.

As the final seconds of Cleveland’s 93-89 victory at Golden State in Game 7 ticked off on the giant scoreboard inside Quicken Loans Arena, 18,000 fans, some of them strangers when Sunday night began, cried, hugged, screamed and shared a moment many of them have spent a lifetime dreaming of.

They then linked arms and shouted the words to Queen’s “We Are The Champions,” a song that seemed reserved only for others.

For the first time since 1964, when the Browns ruled the NFL, Cleveland is a title town again.

With James leading the way and winning MVP honors, the Cavs became the first team in NBA Finals history to overcome a 3-1 deficit.

There’s absolutely nothing left for James to prove. The only thing he hadn’t done on a basketball court was make Cleveland, a city whose sports teams were cursed for so long, a winner. December 27, 1964 was the day Jim Brown last made them one. That is, until June 19, 2016. James was an NBA champion before from his time in Miami, an Olympic champion, an MVP, a Finals MVP … he had checked every box but one, and now that one is filled as well.