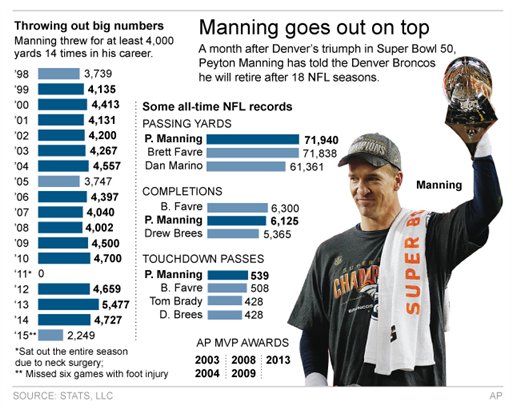 Peyton Manning surveyed the landscape of his brilliant career and called one last audible. He’s retiring a champion.

A month after Denver’s triumph in Super Bowl 50, Manning informed John Elway he is following his lead and riding off into that orange sunset just like the Broncos’ boss did 17 years ago after winning his second Super Bowl.

Just shy of 40, Manning will forgo $19 million and a 19th season in the NFL, where he served as both a throwback and a transformer during a glittering career bookmarked by an unprecedented five MVP awards and dozens of passing records.

“Peyton was a player that guys wanted to play with,” Elway said. “That made us better as a team and I’m thrilled that we were able to win a championship in his final year.”

The Broncos scheduled a news conference for 11 a.m. Monday.

Manning leaves the league he helped popularize to supersize status as its all-time leading passer and winningest starting quarterback, the only one in NFL history to win Super Bowls with two franchises.