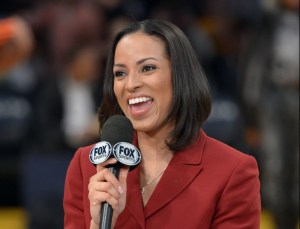 [Dallas, TX – September 2nd]
Coppin State Alumna Stephanie Ready to Become First Female Full-Time NBA Broadcast Analyst. Before the summer started executives at Fox Sports Southeast came to Stephanie Ready with an idea to make her the FOX Sports Southeast telecast team play-by-play analyst for the upcoming season for the Charlotte Hornets . This was a huge promotion to her dream job and It also makes her the first woman to hold the position of full-time NBA game analyst for a team’s local broadcast.

“I am so excited because this is why I got into sports broadcasting,” Ready said. “Years ago, I envisioned myself being a game analyst — and not necessarily with the NBA. But once I started working with the NBA team in Charlotte in 2004, that really became my focus.”

Load More... Follow on Instagram
L.A.’s Next Emerging Artist YOUNG ONASSIS Drops Banger “WHEN I WANT IT”
To Top