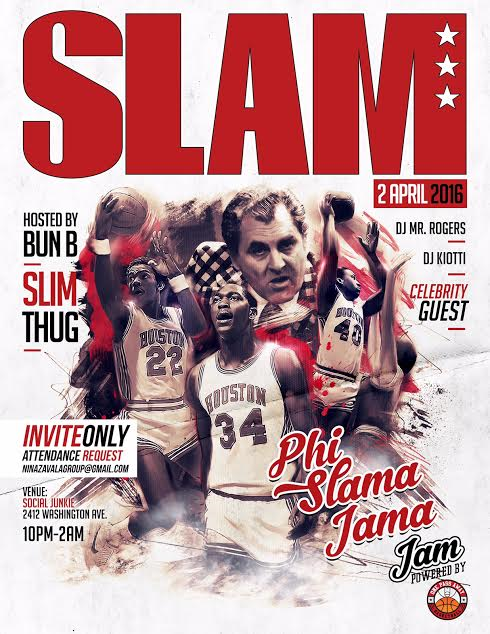 HOUSTON, TX (March 17, 2016) – The 2016 NCAA Men’s Final Four®showcases the most prominent and notable athletes from the best college basketball programs in the nation as hey exhibit their talents in front of millions of viewers riding high on March Madness. Before the big championship game on Monday night, the biggest names in sports will converge on Houston’s nightlife looking for the best entertainment the city has to offer. The Phi Slama Jama Jam event will take place from 10:00 p.m. to 2:00 a.m. onApril 2, 2016, at Social Junkie located at 2412 Washington Ave.

Hosted by SLAM Magazine, One Pass Away and the Nina Zavala Group, the Phi Slama Jama Jam will unite industry and sports power players with Houston’s elite social scene as they celebrate the storied history of The University of Houston’s Phi Slama Jama men’s basketball team. Several celebrities have confirmed their appearances including special invited guests and Hall of Fame basketball icons Clyde “The Glide” Drexler and Hakeem “The Dream” Olajuwon, who will be on hand to receive special honors for their place in the annals of Houston’s basketball lore.

To request attendance to the event, please email NinaZavalaGroup@gmail.com

What: SLAM Magazine, One Pass Away and the Nina Zavala Group presents the Phi Slama Jama Jam hosted by Bun B and Slim Thug

Load More... Follow on Instagram
2016 March Madness Being Called the Best One In Years , Are You Ready + Print your Bracket Today
Long Time MLB Unmpire Tim Welke Retires After Over 40 Season
To Top