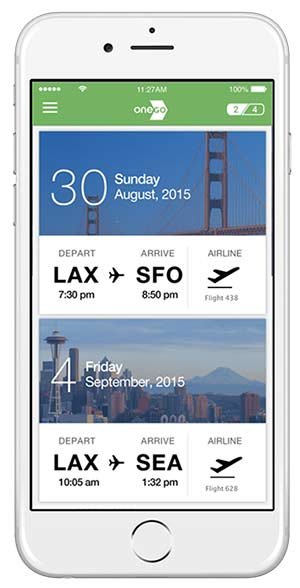 A new startup called OneGo wants to be your Netflix for your next flights.  For a monthly subscription that costs a good bit more than $9.99 a month, OneGo can give you unlimited flights in the US on all major airlines. Plans start at $1,500 per month and max out at a whopping $6,600.

That may sound like a lot, but for frequent fliers, OneGo could make a lot of sense.

OneGo supports over 700 routes and 76 airports throughout the country, and it breaks subscriptions into four base costs:

OneGo also requires a one-time $495 fee to set up a new account, but after that you only pay the monthly subscription, which includes taxes.

With each monthly subscription, you’re able to reserve up to four one-way flights at a time. Bookings can happen at the very last minute, but you’ll have to pay an additional charge if you book less than seven days in advance or have to cancel.

You will eventually be able to pay additionally every month for perks like unlimited last-minute bookings, but OneGo has yet to determine that cost structure.

For a completely unlocked nationwide plan with no additional fees, OneGo costs a healthy $6,600.

The OneGo iPhone app lets you look at flights from participating airlines (the current list is Alaska Airlines. American Airlines, Delta, JetBlue, United, and Virgin America), make bookings, track your frequent flyer milers, request seats, and so on. An Android version of the app will be available in March.

Load More... Follow on Instagram
Urber Reveals New Logo Inspired by Bits and Atoms, Gets Rid of “U”
[Tech News] Exclusive: Wyclef Jean on His New Tech Partnership and the Future of Audio
To Top