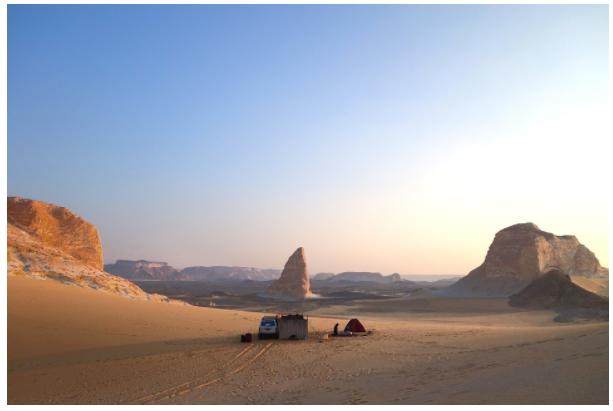 The desert is the ultimate place to release your inner adventurer. There are plenty of deserts around the world waiting to be explored. Here are some of the top places where you can get your fix.

When most people think of deserts they think of Egypt. On top of its ancient history, Egypt has many impressive natural wonders if you’re willing to venture out into the Sahara. A five hour drive from Cairo, you’ll find the Black and White Deserts. The Black Desert is so-called because of its charred surface as the result of volcanic activity. The White Desert meanwhile is made up of chalk-white rock formations. You’ll find many desert tours in Egypt including camel rides and safari tours in jeeps.

Many forget when visiting Dubai that the city backs onto a massive expanse of desert. There are lots of UAE attractions involving the desert including nature trails and tastes of Bedouin life. A number of safaris can also take you out into the desert where you can have an evening BBQ and watch the sun set over the desert.

The Atacama Desert in Chile looks like a scene from Mars. Its mountainous terrain sports geysers, hot springs and ravines. Many hikers from around the world flock to this desert for its challenging mountain routes. You can also take horse rides across these mountains and even explore the desert from the air via hot air balloon. The Atacama Desert is the driest in the world and so can be pretty hostile. There are many guided tours which can offer security and navigation. This desert remains relatively warm all year around.

The deserts of Namibia are ideal for those wanting to journey off the beaten track. Here you’ll find some of the highest sand dunes in the world. There are also must-see sights such as the clay pan of deadvlei that was once an oasis but has now dried up. Those visiting this desert can see many exotic wildlife including black rhinos, hyenas, ostriches and elephants. There are many Namibian guided tours into the desert.

The USA has no shortage of impressive deserts. Arizona is one of the top states for getting a taste of the Wild West. Mighty rock formations such as Monument Valley can be found here – the backdrop of many Hollywood movies. There’s also the Grand Canyon, carved out by the Colorado River. It’s easy to hire a car in Arizona and see many of these sights yourself but you may want to take a specialised coach tour instead. Head west to Nevada and you’ll find some equally impressive sights such as Fly Geyser, as well as the chance to visit the city of Las Vegas. Continue west to California and you’ve then got more impressive deserts such as Joshua Tree National Park, renowned for its plains of Yucca trees and rocky formations. Hiking is popular in this area and there are also many jeep and horseback tours.