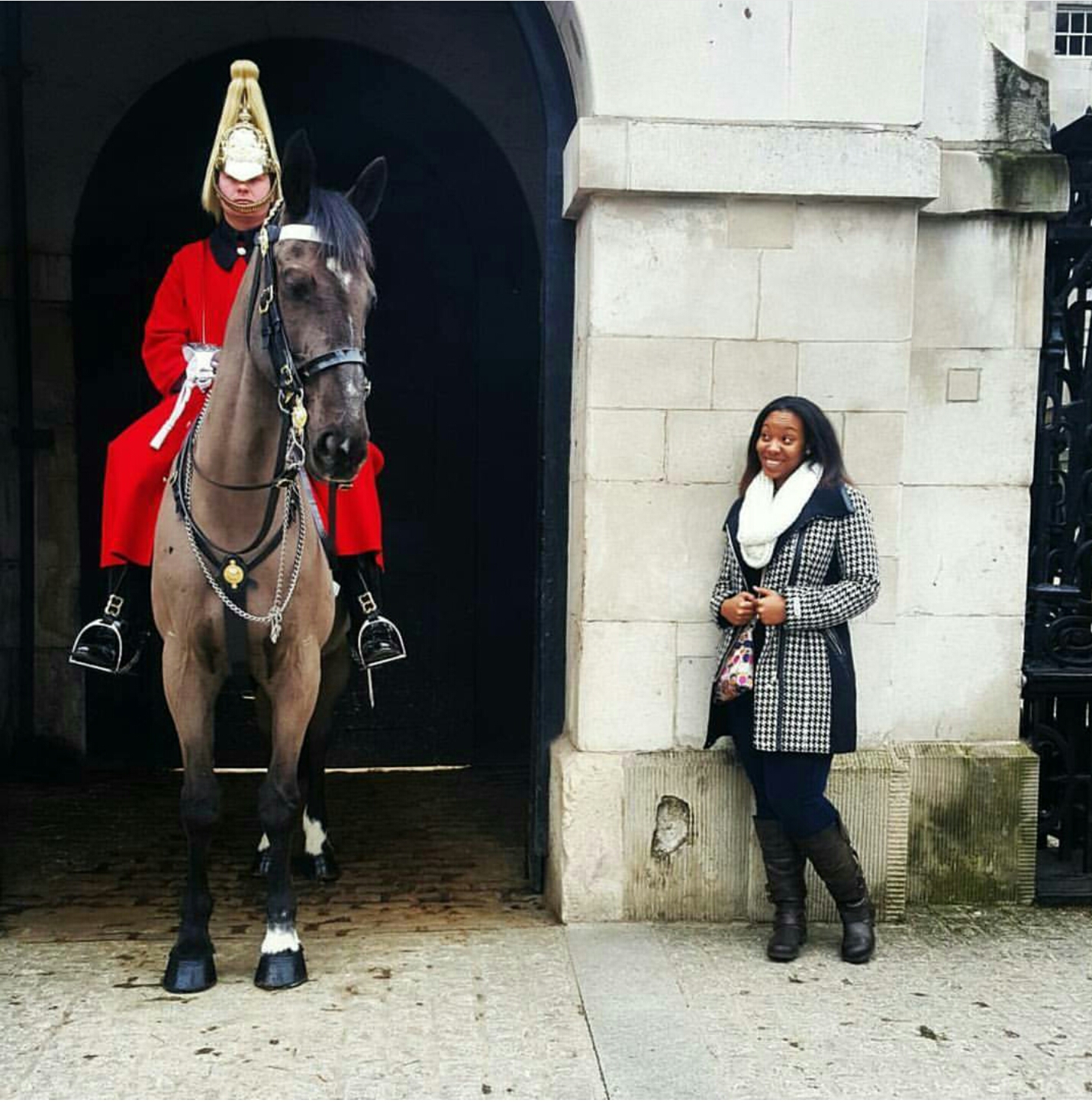 This week I want to introduce a very special guest. She’s a lawyer, Aggie alumna, Gemini (yes, she’s a wee bit crazy), my travel buddy, and partner in crime. She traveled to the United Kingdom and France in March, and she plans to visit two more countries before the end of the year.

During this interview she shared some great tips regarding solo travel as well as a story about a family vacation gone wrong.  So let’s meet this ball of energy! Please give a warm welcome to Tifanee Baker!

AJ: I love this picture of you and the horse. Where was this photograph taken?

Tif: In London. I know it looks like I’m posing, but it was actually a candid shot. I was slowly trying to inch my way closer to the guard, but when I did, the horse looked at me. I started laughing and my girlfriend took the picture at that moment. She ended up getting a great photo.

AJ: How many countries have you visited?

Tif: It’s funny that you ask that. I don’t think I’ve actually sat down to count. Let’s see. I’ve been to Mexico, Canada, Guadeloupe, Spain, Portugal, Italy, Malta, France, and the United Kingdom.  I’ve also passed through Amsterdam and Germany while connecting to other flights. I was just in the airport, but it still counts. (Laughs)

AJ: Out of all the countries you listed, which one is your favorite?

Tif: My favorite country is Spain; however, my favorite city is Paris. I’m actually in love with Paris. I love, love, loooooooooove Paris! It was so beautiful.

I thought it was going to be harder for us to get around the city because of the language barrier; I didn’t know any French.  But it wasn’t bad at all. There were a lot of people who spoke English and a lot of the signs were in English. Getting around was much easier than I thought. I actually think that you could go on a solo trip to Paris and be fine.

AJ: Speaking of solo trips, have you taken one?

TIf: I would count my vacation to Guadeloupe as a solo trip, even though I had someone taking me around. My friend had relatives living there, and I met up with her family. But there was one day that I was literally by myself, because the person showing me around Guadeloupe had to work that day. I walked around by myself and was perfectly fine.

AJ: Was it scary?

Tif: No, it wasn’t scary. But I don’t have a problem doing things by myself. I would do it again. That’s my personality though. I can talk to anyone no matter where I am. I’m comfortable engaging in conversation with other people. For example, when I was studying abroad in Spain, I made several friends while I was there. I just happened to run into some people and we started hanging out.

AJ: Would you recommend solo travel?

I’ll say this: some people aren’t comfortable engaging with strangers when they’re in places they’re not familiar with. If you’re not comfortable talking to strangers and/or being by yourself, it might not be for you.

AJ: Tell me about your least favorite vacation?

Tif: It was a family vacation to Colorado.

I was expecting to leave Texas by 4a.m.; we didn’t get on the road until the end of the day. To add, they didn’t have any ski apparel, so we had to stop at several places so they could find stuff that they should’ve had before we even left. When we finally got to Colorado, all I was able to do was snow tubing. I was so annoyed because I took time off of work for the trip and we didn’t even ski. That was the main reason we went there in the first place. Most of our time was spent traveling in the car. We didn’t have time to do anything. But it’s okay. When I got back from Colorado, I booked a trip to Vegas just so I could ski. I was so determined to get on the slopes. (Laughs)

AJ: Any advice for our novice international travelers?

Tif: I would just say be open minded, embrace the culture of the place that you’re traveling, and be aware of your surroundings. I think sometimes as Americans, especially for those that haven’t traveled much, you forget that you are a tiny speck in a very, very large world. Everything doesn’t revolve around you and your country. Be humbled that you’re in someone else’s home, learning about their customs.

AJ: Before we end the interview, talk to me about your travel blog and Instagram page.

Tif: I came up with Travel for Stamps by accident because the name I originally wanted was already taken when I was searching for a domain name. The website is travelforstamps.com, but it’s currently under construction. Right now I’m taking a small hiatus to think about the direction I want my blog to go in. I’m toying with the idea of how I want to write my submissions. I’m hoping to have it together by the end of the year.  In the meantime, I’m working hard on my Instagram page. I feature travelers on my account as well as travel deals and quotes that I come across.

AJ: How does someone get featured on your page?

Tif: It’s simple! Follow my page and tag Travel for Stamps. I also will go through my follower’s pages. If there is a picture that grabs my attention, I’ll repost.

That concludes our interview. If you would like to share your travel experiences on the Culture Supplier, please send an email or shoot me a message on Instagram @callme_ambam. It goes down in my DMs!

Load More... Follow on Instagram
The Urban Addiction: 7 Summer Vacay Essentials Everything ASOS.com
One Year and One Suitcase & a Whole Lot of Faith
To Top