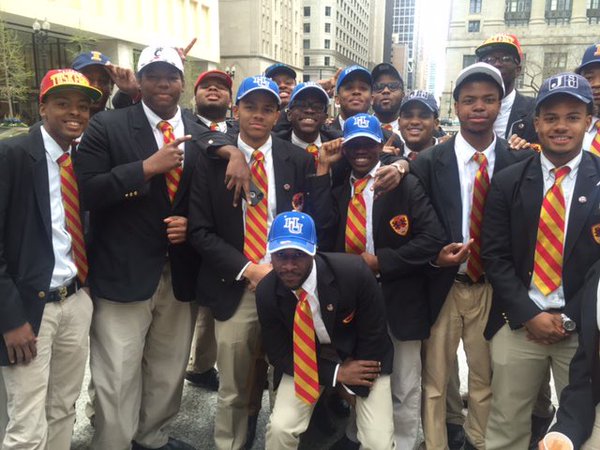 The students at Chicago Urban Prep Academy are celebrating their successes – and rightfully so!

The academy’s founder and CEO Tim King tells CBS Chicago that its students have been accepted to more than 200 colleges and universities, including Georgetown, Yale, University of Illinois, Morehouse and more. The class of 2016 also received more than 1,500 college admissions in total and over $15 million in scholarship and grants.

“Every year, I’m just wowed by these young men by what they are doing. They really make me proud. We started Urban Prep with the goal of moving the needle when it comes to black male achievement and these guys proved to me, the city and the world every year, that we did the right thing when we founded Urban Prep ten years ago,” said King.

Urban Prep operates three campuses in the Chicago area, including ones in Englewood, West and Bronzeville.

“We love telling the world where we’re going in life. We share our brotherhood. Urban Prep expanded my mind, to look at the bigger picture,” said Tyree George, who will attend Hampton University and major in veterinarian medicine.

Can we all agree that #BlackExcellence knows no bounds? Congrats to the class of 2016!

Load More... Follow on Instagram
Broccoli City Festival Is Just a Few Days Away! Here’s Your Guide To A Successful Fest Experience
[Culture News] Ballerina Misty Copeland to ‘Inspire the Next Generation’ With Her Own Barbie Doll
To Top