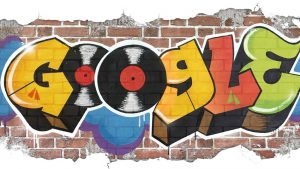 Google has teamed up with Fab 5 Freddy, former host of “Yo! ​MTV ​Raps” for a quick crash course in Hip-Hop history, and to give users an introduction to the basics of the game. And the doodle features three original tracks by Prince Paul, whose claim to fame includes producing De La Soul’s “3 Feet High and Rising.” The Google Doodle also underscores a pivotal point for hip-hop

Google’s Hip-Hop doodle will remain on the search engine’s home page for 40 hours, after which it will be archived in the company’s doodle gallery.

For Google, the Doodle’s creation is unprecedented. “We’ve never done a Doodle like this before, both because of the technical challenges and the many voices and collaborators we wanted to include,” Perla Campos, one of three Googlers behind today’s Doodle, says in an expanded Q&A about its creation

The Doodle features art from graffiti artist Cey Adams and has interactive turntables that let you mix your own samples using famous songs right from Google’s homepage.

To get started, all you have to do is click the play button on the “O” in the graphic. It then takes you to a “record crate” where you can choose samples of classic songs from artists like George Clinton, The Isley Brothers, Billy Squire, and Betty Wright. When you’ve picked your songs, you can customize the mix using slider controls.