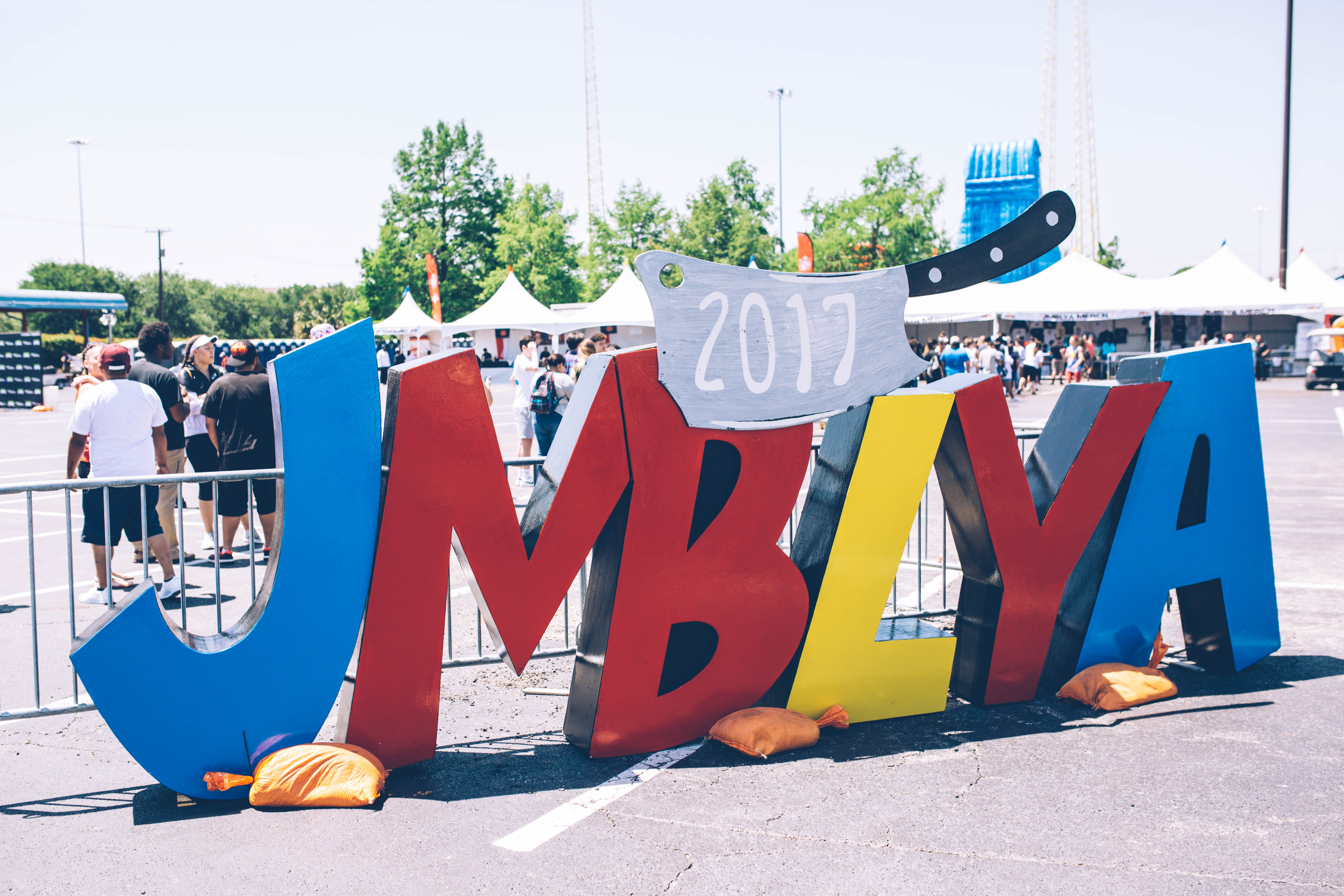 In its fifth year, Scoremore’s annual JMBLYA occurred in Dallas this past Friday, and delivered a stacked lineup to over 5,000 eager fans at the Coliseum Parking Lot at Fair Park. The festival took place at this location for the second year in a row, with an extended footprint in comparison to last year’s installment, a wise move given that the celebration completely sold out and managed to fit all of the attendees comfortably. It was multi-factorial experience complete with bounce houses, free food, a bungee tampoline, water slides,creative photo-booths, and more. With the progressing wave of pre-summer heat making its debut across North Texas, Scoremore made efforts to keep the patrons well hydrated with free water throughout the entire  duration of the event.  The event satiated its attendees’s appetites for fun while bestowing them with performances from some of today’s most promising hip-hop and EDM acts, along with some up and coming artists, as well.

The show was kicked off with acts such as singer/songwriter Pell, Fort Worth’s Snow Tha Product, YFN Lucci, Young Dolph, and R&B sensation 6lack. Next was Lil Uzi Vert offered a very noteworthy performance. He’s a spit-fire, frantic ball of zealous energy while on stage, and he appeared to all but bounce off of every wall and banister within reach. He even in made an unexpected nosedive into the audience, which sent everyone into an uproar.

EDM heavyweight and Dim Mac founding father Steve Aoki astonished the audience with his larger than life screen-stage setup. He kept the vibe lighthearted and fun whilst showering spectators with popped bottles of champagne, and rightfully humored them with his ceremonial cake throwing progression.

It was Migos who undeniably stole the show, doubling as both the luminaries and the foothold of the ceremony during their set. The trio offered the most momentous performance of the entire day, kicking the crowd into high gear with full blown participation with back to back hits such as “Pipe It Up,” “Bad and Boujee,” “Get Right Witcha” and “T-Shirt.”

Atlanta’s own Gucci Mane offered support before the headliner, who is currently back to touring following his release from prison last year. He appeared to be his old self and in very high spirits, offering cuts both old and new across his various array of tracks from his mixtape catalog, including “Lemonade,” “Photoshoot” and his recent track featuring Drake, “Back on Road.” The stop was noted to be a part of the rapper’s Trap God Tour, and it was refreshing to see the long time Atlanta icon back in his element after overcoming such controversy.

The heavily anticipated headliner for the 2017 festival was none other than the beloved Chance the Rapper, a recent three time Grammy Winner with a notable influence in today’s music scene. Chance, who is renowned for his intense energy during performances, had unfortunately injured himself playing basketball prior to taking the stage. He winced in pain multiple times as he shuffled back and forth across the stage to “Blessings” a notable decline in his usual boisterous energy. He eventually attempted to pick up a bit, but faltered occasionally. In his aid he brought out his bill support in that of Migos and Gucci Mane, and had a surprise appearance from Rae Sremmurd’s Slim Jxmmi. His set was noticeably short, and left the fans somewhat longing for more.

In essence, the event was very well orchestrated altogether, with only a few minor hiccups that were completely outside of the festival’s realm of control, given Migos delayed stage arrival and Chance’s minor leg injury. This was the festival’s largest event to date, and we’re sure that they will continue to grow and expand at great lengths in the future.