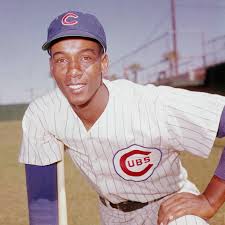 Mr. Cub” Ernie Banks, the Hall of Fame slugger and two-time MVP who never lost his boundless enthusiasm for baseball despite years of playing on losing Chicago Cubs teams, died Friday night. He was 83.
Banks was born and raised in Dallas. He entered Negro league baseball in 1950, playing for the Kansas City Monarchs. He served in the US military for two years and returned to the Monarchs before beginning his major league career in September 1953. He made his first MLB All-Star Game appearance in 1955. Banks received back-to-back National League Most Valuable Player awards in 1958 and 1959.