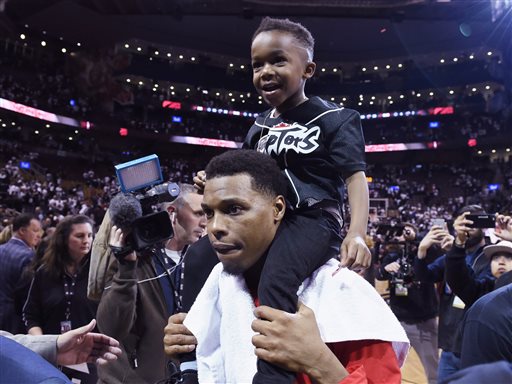 Less than two weeks ago, Kyle Lowry was a struggling so badly that he stayed past midnight to work on his game after a tough playoff loss.

Now a red-hot Lowry is carrying the Toronto Raptors into their first ever Eastern Conference finals.

Lowry scored 35 points, DeMar DeRozan had 28 and the Raptors reached the conference finals by beating the Miami Heat 116-89 on Sunday. They play in Cleveland on Tuesday night.

“I missed some shots I could have made, but we won the game,” Lowry said. “That’s all that matters. I’m going to keep pushing and try to be better, and do things to keep helping my team get wins.”

Things were a lot different in Sunday’s Game 7 when Lowry topped 30 points for the second straight game and the third time in the series. A standing-room-only crowd of 20,257 cheered every one of Lowry’s baskets, roared in appreciation when he was subbed out with the game winding down, and then chanted “We want Cleveland” as the final seconds ticked away.

Toronto will need both Lowry and DeRozan to continue pouring in points to have any chance against the Cavaliers, who are unbeaten so far this postseason.

The two Raptors All-Stars have been inconsistent so far in the playoffs but seem to be finding their form at the right time. They’ve combined for more than 50 points in three straight games.

“They’re our guys,” Raptors coach Dwane Casey said. “They carried us all year. There were some moments of ‘Are they ever going to make a shot?’ But deep in your heart, you believed that those guys were going to come around.”

Toronto won two of three against the Cavaliers in the regular season, with both victories coming at home by a combined six points. Toronto’s defeat was a lot more lopsided: they lost 122-100 in Cleveland on Jan. 4.

Scouting booklets for the Cleveland series were sitting on the chair of each Raptors player inside their locker room less than an hour after Sunday’s game.

By knocking out Miami, the Raptors left Charlotte, the Los Angeles Clippers and New Orleans as the only NBA teams to never reach a conference final.

“We aren’t satisfied,” Lowry said. “It’s just our mentality. Our goal is to play as long as possible. Everyone is excited and, yes, we’re excited, but we want to continue to get four more wins and get to the finals.”