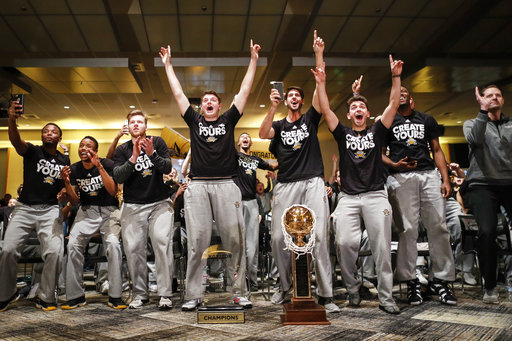 There were tears in Syracuse, head-scratching about Duke and more than a few double takes at Wichita State.

At Northwestern, they simply celebrated.

On a Selection Sunday that was more about minor quibbles than pure outrage, Northwestern’s first trip to the NCAA Tournament in program history stole the headlines — reminding hardcore fans and casual bracket-fillers alike that March Madness really is that time of year when anything can happen.

The forever also-rans from outside of Chicago knew they’d see their name pop up when the brackets were released, but when they did, they partied anyway. Group hugs. Selifes. A huge sigh of relief and a celebration for a Big Ten program that’s always been big on smarts, short on hoops.

“I’m used to being part of all the ‘firsts’ here,” said senior Vic Law. “I was Coach (Chris) Collins’ first recruit. That belief that we all had — that vision that me and Coach Collins shared — was that this would be different.”

Action in the tournament begins Tuesday with opening-round games, and things get into full swing Thursday. The Final Four starts April 1 in Phoenix.

Joining Kris Jenkins and ‘Nova on the “1” line were Kansas, North Carolina and Gonzaga.

A few more notes and notables from Selection Sunday:

SYRACUSE: Orange coach Jim Boeheim said his players were crying when they didn’t see their team’s name come up during the selection show. Syracuse had an 18-14 record, nearly identical to its mark last year, when the Orange made it into the field to a chorus of protests. Syracuse responded by making a run to the Final Four. Boeheim: “I think our team was a little bit better than we were last year going into the tournament. We had the ability to win.” Instead, they’ll try to win in the NIT.

DUKE: Some bracketologists moved Duke into the ‘1’ position over North Carolina on the strength of the Blue Devils’ four-win-in-four-night run at the Atlantic Coast Conference Tournament. Not so fast, said selection committee chairman Mark Hollis. He said Duke began the week as a No. 4 seed and never really moved into consideration as a 1. Duke moved up until it ran up against two teams that took both their regular-season and tournament titles — Arizona and Kentucky.

WICHITA STATE: In the latest Associated Press poll, Wichita State is ranked 20th. If rankings equaled seedings, that would make the Shockers no worse than a No. 4. Imagine their shock when their name showed up with a “10” by it. “I’m just glad they didn’t forget about us,” coach Gregg Marshall said. The Missouri Valley Tournament champs won 30 games. About that AP ranking, Marshall said: “Somehow, 20 divided by four equals ten. But that’s OK. That’s the way it’s been for a long time. I don’t know what we’d do if we were a really good seed most of the time.” Seeded first in 2014, the Shockers ran into a Kentucky team that was surprisingly seeded eighth, and lost in the second round.

BRAIN BOWL: No matter how the game ends up, the guys from Northwestern and Vanderbilt will probably turn out OK. The West Region’s 8 vs. 9 matchup pits two of the strongest academic schools in the country. Said Northwestern athletic director Jim Phillips : “Maybe at halftime we’ll compare SAT and ACT scores.”

UNDERAPPRECIATED: Oregon slipped to a No. 3 seed, in large part because of the season-ending injury to shot-blocking star Chris Boucher. Middle Tennessee State, with 30 wins and most of the roster back from the team that beat Michigan State last year, is a 12 seed — possibly a couple slots too low and setting up No. 5 Minnesota for a tough opening game. Baylor looked like a 2 on most lists but slid to a 3, in a flip-flop with Louisville.

MATCHUPS-PLAYERS: Gonzaga’s Przemek Karnowski vs. South Dakota State’s Mike Daum. Karnowski is one of the biggest and craftiest big men in the country — a, 7-foot-1, 300-pound force on the inside. Daum is the highest-scoring player in the tournament, at 25.3 points a game (with 8.2 rebounds).

Dirk Nowitzki Is Now A Member of the 30,000 Club
The Ball Family Sports Center Feature
To Top