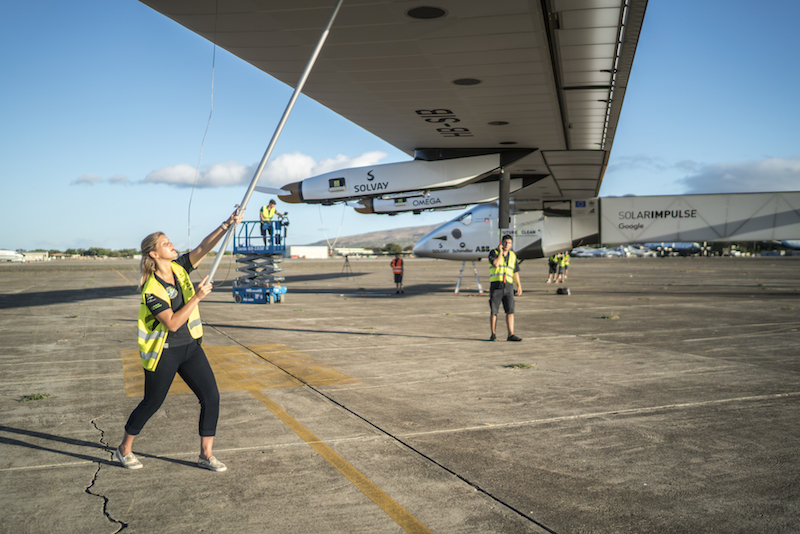 The world’s first solar-powered plane, Solar Impulse 2 (Si2) has been making headlines as it completes a historical journey around the world. While the technology behind it is impressive, I’m equally intrigued by 22-year-old electrical engineer Paige Kassalen, who is helping to make it happen. She’s one of three women on the 16-person ground crew, the only American woman on the international team, and the youngest person responsible for safe takeoff and landing of the plane.

Kassalen’s role on the “catching crew” includes steering the tail of the 5,000 lb. plane as it taxis onto the runway, then catching the wing when it lands.

After graduating from Virginia Tech last year, she joined Covestro and was quickly tapped to represent the company for the Solar Impulse journey. “When someone offers you the opportunity to travel around the world in a solar-powered plane, you don’t think twice,” said Kassalen. Her job on this mission is not only groundbreaking as a young woman, but for any engineer.

Her career trajectory to get there relied on a combination of determination and sponsorship, she said. After graduation, she was based in Pittsburgh for a rotation program with Covestro. Soon, a mentor – a VP at the company – recognized her potential and advocated for her to apply to a position on the Si2 ground crew. Personally, I’ve long been an advocate of female sponsorship as a solution to fostering diversity and inclusion within organizations. Kassalen’s path is proof that engaging leaders to identify diverse talent early and champion them across the company, works.

Her work on Solar Impulse is unchartered territory; when the plane is taxiing, Kassalen is one of two people holding and balancing the 236-foot long wingspan. According to her: “It’s an amazing process but there’s no guide on how to be on the ground crew for a solar powered airplane!” Couple that with the quick learning she’s had to do on communication; being one of the few native English speakers on the team. “It’s an intense job – the welfare of the plane is literally in your hands,” she said.

“Seeing a female engineer at work isn’t crazy,” she said, but she persevered to overcome internal struggles of doubt. “In class, I would be nervous to raise my hand and get answer wrong…I just would not want to be wrong, but when someone else spoke, half the time I had the right answer in the first place,” she said. “I was frustrated – why was I so scared of failing? I had to train myself to be ok with failing .” In her opinion: “Young women are expected to be perfect” and that feeds into the fear of taking risks and being “afraid to fail.”

Load More... Follow on Instagram
Nike is the Most Valuable Clothing Brand on Earth, and Most of its US Employees Aren’t White
Portland Tiny House Rotates to Follow the Sun
To Top