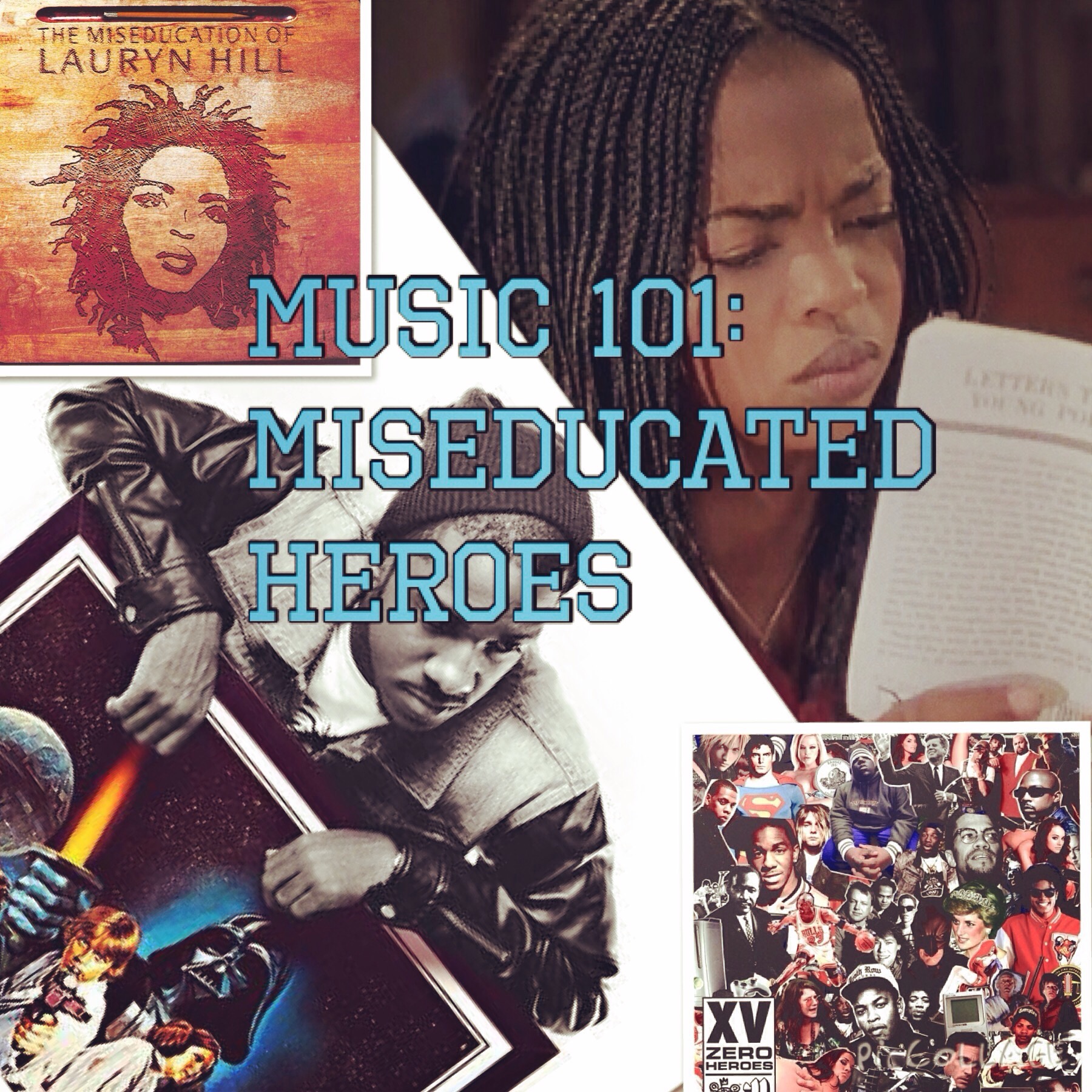 Music has evolved through the ages, and a lot has changed about what we like in music. Some of us like to dibble and dabble in the ratchet music, enabling us to, “Turn Up” as the young folk call it these days.

Some of us like the trap music, stories and compilations of a “Real N*gga” And his exploits of the money, cars, clothes, and women. Some like to vibe to the baby making ballads of the 90’s, or old school songs mama used to sing when she was cleaning up on Saturdays.  Music is the pathway to the soul, and it connects us all in some way, but it also does something that many overlook.

This series Music 101, will explore some lessons I have learned from albums throughout the years.  The first two albums that have some key life lessons incorporated in them are The Miseducation of Lauryn Hill, by Lauryn Hill of course and Zero Heroes from a rapper from Wichita, Kansas named XV.  One artist is well-known, a legend so to say, while the other is up and coming but you probably never heard of his name.

The Miseducation of Lauryn Hill

To get five Grammies from your debut album, should tell you all you need to know about this album.  The album itself is significant as it displayed how a woman, could take over the Hip Hop game, all the while most importantly, she did it expressing the truth.  Lauryn poured out her soul with this album, and you could not help but feel every melody she was singing, every metaphor she was spitting and every story she told.   This album pretty much taught the cycle of love, and heartbreak, but most importantly, how to love yourself continuously and never let that heartbreak or societie’s beliefs consume or change you.  From the moment Lost Ones started off, “it’s funny how money can change the situation” and so on, she is telling us, do your dirt, be the snake  in the garden, but at the end of the day you think you have won something glorious, but your ways have cost you the lost of something greater.  Some of these same sentiments are expressed in Superstar.    Ex-Factor implanted in my brain that, when we love hard, we tend to not want to let that special thing go, not realizing that the same person you give your all to is the same person who hurts you the most.  Despite how much we show them our love, the potential we see in us, some people still will show you, they will still show you, that it just won’t work, and sometimes you have to let what you love go.  When it hurts so bad piggybacks off this lesson, but also teaches another lesson that sits with me every day. “See what you want my make you cry, and what you need might pass you by, if you don’t catch it” and “What you need ironically, will turn out what you want to be if you just let it.”  We tend to hold on to the things we want to work, despite the hurt, but the potential “Feels so good” if it ever comes, that we let our blessing pass us by sometimes.  But Lauryn shows you, she is strong enough to admit she is hurt, but also strong enough to move in, for an example, with the help of Mary J Blige, I Used to Love him, the lyrics pretty much tell you what she is feeling.  But the most important lesson of the album was self-love.  That Thing (Doo-Wop) and Everything is Everything were the pioneers of respecting and loving yourself. One line I loved was “don’t be a hard rock when you truly are a gem” Treat yourself as the royalty that you are, although geared toward the women, this is an essential part of life that is needed even now 16 years later.  “How you gon win when you ain’t right within?” Lauryn come back and preach that again, because this is also another lesson my people need to absorb.  You have to be right with yourself, and God, and give what you want in order to receive the best.  “Just love ourselves and we can’t fail to make a better situation,” Forgive Them Father teaches and forewarns you of those snakes in Lost Ones.  Some people will treat you how they want in order to gain something and will be that wolf in sheep’s clothing waiting to back stab you.  “Everyday people, they lie to God too, so what makes you think they won’t lie to you?” Realest thing I never wrote.

What do we hear in today’s music from most rappers?  Guns, violence, girls, drugs and other mainstream subjects that many of the artist never even went through.  Well XV said F*ck all that, Ima rap about what I like.  Never have I heard an artist rap about final fantasy, comic books, anime, and more nerd stuff.  I mean he stills displays his love for women, alcohol, and looking fly, but he isn’t afraid to be himself on the track.  A witty rapper, with punchlines and metaphors, it’s not so much his quotes that I identified with but more so what the overall song was about.   The first lesson XV taught me was to be proud of who you are and your live your life-like it.  I was always a person who cared way to much of what people thought of me, and during high school and earlier years of college.   I didn’t necessarily want people to know, I was the nerd that listen to anime music, played RPGs, watched anime on my laptop and still played Pokemon.  I enjoyed who I was in the shadows, but not proudly and out loud.  We all have double personas sometimes and we are afraid of being judge by the one that isn’t socially acceptable.  A black kid who like anime in a time where being a “Real N*gga” was to be ashamed of, it wasn’t cool. I was square, and you know what they say, keep those squares up out your circle.  But XV bold took that title, and welcomed me to the Squarian nation.  Now this isn’t the first XV mixtape I that listened to, but just the hooks and the samples taught a lesson The first track after the intro When We’re Done, opens up the albums theme, live your life, be yourself and take whats yours. “Not everybody lives but everybody dies, so while a N*gga here, I’m shooting for the sky, landing on the moon, walking on the sun.”   The beat itself compliments his nerdom and mine as it takes the song Sanctuary from the popular Kingdom Hearts 2 video game.  With that song this album became part of my sanctuary, I started realizing this man is proud of who he is and expressing it to the world, why can’t I?   “I neva Change for the streets, I don’t pay the meter”, a line that was short, but explained our hip hop culture.  We change who we are to fit the image of the streets and what society thinks we should be.  In Foreign Exchange Student, XV spits about a woman who is not quite like others.  All this time I’m listening and taking in the concept of being myself and making people except me for me, this song shows his appreciation for the women who do the same thing.  He applauds the women who don’t hide behind what society thinks they should be and take pride in their interest and personality.  The last song on the album The Last Hero, takes the theme of his title and finally explains what he is saying.  With the line ” They living for the Villains, I’m dying to be a hero”, other than being a Dark Knight reference, I see that we live to be those who don’t mean us any good, who only accept us once we become them, so die for what you believe, never compromise who you are as person.  He then ask a very real and relevant question, ” Where’s the leaders, when everyone says follow me? so the leaders are also doing the following.”  A social media jab maybe, but more importantly, if we are following someone else’s dream, who will be left to fight for you?  We focus on fitting in so much that we lose track of who we are. Lastly The title and album cover of  Zero Heroes is a statement in itself.  We were taught that if didn’t fit in, we were Zeroes, nobody squares, our existence is irrelevant.   But this album tells us to tie everything we are, everything we believe in, and everything we love, and use it to live our life, not hide from it.  You can see on the album cover pictures of XV’s Heroes, MLK, Malcom X, Both MJ’s and Batman.  But also some people who you wouldn’t think of like Master Chief, Cloud Strife, Doc, Marty Mcfly, a couple of porn stars (LOL), and most importantly HIMSELF.   The real heroes are those who overcome adversity, and those who stick to what they believe in regardless of what other’s may think.  A zero to you could be someone else’s hero, but most importantly, be your own hero, and stay true to yourself.

That concludes this session of Music 101.    We sometimes hide who we are in order to be accepted by society and lose ourself in the process.  But why conform and why be a shame of who we are.  Love every flaw and detail about yourself, be despite what they taught us.  Be your own Miseducated Hero.