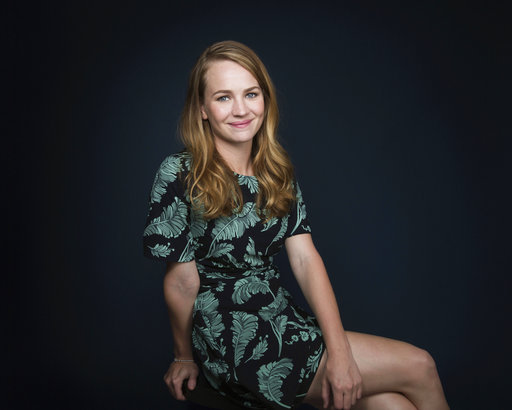 Britt Robertson is no stranger to having to emote on the screen. She played a foster kid who finds her birth parents in the CW series “Life Unexpected” and a young waitress kidnapped and held hostage in CBS’ “Under the Dome.”

The 27-year-old actress is now starring in the Netflix comedy “Girlboss,” based on the rags-to-riches story of Sophia Amoruso, who started selling vintage clothing on eBay in her early twenties and built the Nasty Gal empire that made her a millionaire. The best-selling “#Girlboss,” published in 2014, is the basis for the series.

Robertson says she thought acting in a half-hour comedy would be easy, but playing a version of the fearless and witty Amoruso, called Sophia Marlowe on the show, was “energy-sucking.”

“It took more out of me than anything else I’ve ever done in my life, in a good way. You want to be challenged. You want to be fulfilled and that takes energy, but … it’s hard,” she said recently.

Robertson had to change her look for the show, dying her blond hair to chestnut brown and adding bangs. She also rocked vintage clothing to represent Amoruso’s style.

“I think it was really important for me to change the way I look. Even when we were doing the costume fittings we would have to put a wig on me. It was so hard to picture the real Sophia character I was trying to embody while I look like a bleach-blond surfer girl. It just didn’t really make that much sense. I loved it. It was so much fun for me. It’s so hard to keep up though because it’s not my natural color. My hair was not having it by the end. It was turning red and orange and yellow.”

Amoruso stepped down as CEO of Nasty Gal in 2015. The company filed for Chapter 11 bankruptcy the following year and Amoruso resigned from the company.

Robertson says she’s not sure if future seasons of “Girlboss” would follow the real story of Sophia’s life that closely.

“Sophia’s story is still changing so much as we speak,” she said. “She’s at a really crucial part where she’s figuring things out a decade later in a different way so I think it just depends. Also she’s a producer on the show. I’m sure she’ll have some direction she’d like us to go in, but maybe not.

“She was very forgiving when we started doing the show and with my performance and with the writing; I hope we can take the things she’s experienced in life because it’s very fascinating. I hope people would love to hear a version of the story that isn’t just the media side, but we’ll see.”

Now that “Girlboss” has been released on Netflix, Robertson is enjoying her time off from the series.

“For the first time I realize how important it is for me to enjoy what I’m doing and have a good time in the process. I’m really living right now. I went to South Africa. I went on a safari. I went diving with great whites (sharks). The last two days I went to Mets games, which are my favorite baseball team. I’m really living. I’m doing it all. This is my time to check off bucket-list stuff.”