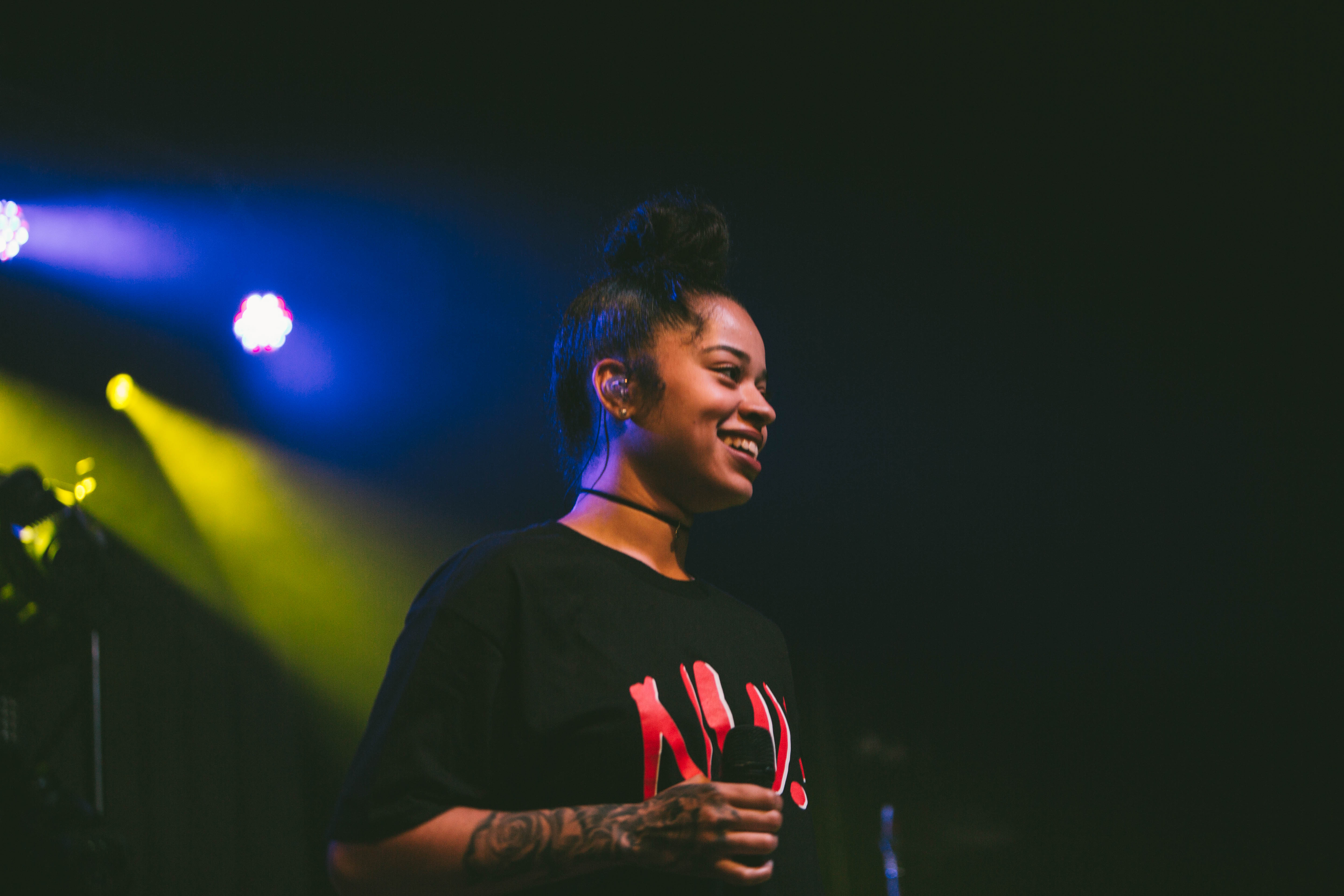 We Caught Up With Ella Mai While She’s On The Road For The SweetSexySavage Tour to talk READY, Tour Life, Self-Confidence, and Texas Bats After Her Dallas Performance. South London born songstress Ella Mai has been flourishing ever since the release of her 90’s reminiscent EP, TIME and the alluring honesty of her second EP, CHANGE in 2016. These were the first two projects of the trilogy of executively produced offerings with West-Coast based hip-hop don, Dj Mustard. Now officially signed to Mustard’s 10 Summers label, Ella is currently on road providing support for Kehlani’s SweetSexySavage Tour. The half-Jamaican half-Irish darling’s EP, READY, hit the airwaves in February and is now her third and final studio EP of the trilogy– all released within the span of the past year. Talk about hard work paying off. Flashback to 2015, Ella first bared undeniable potential even with just a handful of DIY Instagram covers and a meager 4-track EP on Soundcloud. Flash forward to today, and her accomplishments are an aide-mémoire and ode to perseverance. Ella’s rapid career elevation is symbolic of the digital era’s American Dream. Her resilience is what so many aspiring artists hope to attain by utilizing social media to showcase their abilities. She did it, and we couldn’t be happier about that, as all of her EP’s are poignant in delivery of unapologetic, vulnerable, and evocative lyrics that hold so much truth for those struggling with romance qualms, strained relationships, and self-love. The classic gems she’s bestowed upon us in a relatively short time frame have already captivated the hearts of thousands worldwide, and she continues to soar and allure more fans at every stop along on the road.

After her amazing performance at South Side Ballroom here in Dallas, we caught up with Ella Mai in an exclusive interview to find out a bit more about her story, personal influences, and overall inspiration as an artist.

You mentioned during your performance tonight that this is your first time here in Texas. Welcome! How do you like it so far?

I like it a lot! Although, it’s very humid, which I’m not used to at all. To be honest I haven’t gotten a chance to see much of it, but from what I have seen, I like it. But, I just can’t get over the fact that there are a bunch of bats flying around outside. That’s so absurd to me! And they’re EVERYWHERE! Haha, wasn’t expecting that!

Haha yeah, we’ve got a lot of weird things flyin’ around out here, especially during the spring and summer!

So tell us how things came about with you and DJ Mustard?

Yeah, so a bit over a year and a half ago, almost two years ago now, I was doing covers on Instagram, back when they only allowed you to do the 15 seconds of video, in its  first stages. My videos were picking up a quite a bit of attention at that time. I know the Shade Room reposted one of them, and they have, like, however many millions of followers. He actually found me on Instagram, just randomly dm’ed me one day, and was like, how he thought I’m dope, and [asked] what’s my situation. I was just taken aback a bit at first, and had to go on his page and make sure he was the real Dj Mustard! At the time, I didn’t have any situation…I was literally just singing Instagram covers in my bedroom. So, I was just like well…I have no situation, I’m in school for music, I worked in retail, but really didn’t have anything going on just yet. He said that he really wanted to work with me and get me out to LA. It happened to be that I was in New York around the same time that he was in Philadelphia for Made In America Festival. He got in contact with me, actually drove from Philly to New York, and we did a session that same night. We made three songs that night, and now I’m here (laughs).

In essence, what was your inspiration for your latest EP, READY? What do you want your fans to take away from it the most?

With READY I had a little bit more fun in the process of making it. TIME and CHANGE were very black and white and very to the point. READY was kind of like the gray area between the two. It can be up and down – relationships aren’t so black and white. But, it’s also just fun, bouncy music, so, as much as you might be in your feelings, you can still have a good time listening to it.

What was your favorite track from READY, and why?

Damn, it changes every day. I think it just depends on the mood I’m in. But, at the moment, it definitely is “Boo’d Up” which is the first song on READY. Chris Brown was just on his Instagram story listening to it, and I’m a HUGE crazy Chris Brown fan, so it was like surreal. Even at all the shows that we’ve been doing, everyone’s been asking me to put it in my set. It wasn’t originally in my set- I’ve just now put it in, and this is the second time performing it today. So, at the moment it’s “Boo’d Up”. It’s very puppy love, feel good music.

This is your first tour, which is AWESOME and we’re sure you’re having an absolute blast. What would you say you like the most about being on the road, and what do you like the least?

I’ll start with the least…probably just the lack of sleep. You kind of have to really find the pockets of time for when you can sleep, because when we get to different cities, I just don’t want to sleep all day, I want to sight-see and look around. But, sometimes that’s really hard, because there’s after parties or just being really tired from the show the night before. But, you make it work.

What I like the most, is that this is a completely new experience for me. This is my first tour, and I’m getting to go on-stage and see all these different people and places. I’ve never been to even half of these places that we’re stopping at. I always go to the merch booth after the show to meet the fans and take pictures, and that’s always very cool. And just the environment. We have such great teams,  all of us, Jahkoy, Kehlani, and myself. Everyone is so friendly and it’s a great environment to be in.

Growing up, which artists would you say had the most significant impact on you?

I’d say my number one is Lauryn Hill. My mom used to play the Miseducation of Lauryn Hill like, religiously, literally. I knew all of the words on the album by the time I was 15. Chris Brown is a huge inspiration to me as well. Also Jasmine Sullivan. Then there’s the 90’s stars, like Brandy, Monica, Destiny’s Child – I love all of them!

So far, you’ve been touring and living your dream. What do you want your fans to know about you personally? What do you want them to take away from their experience of watching you perform?

The number one thing, in my music anyway, is self confidence. Even if you’re going through something hard, I feel like everything  starts within yourself. You can’t let things accumulate to the point where your’re angry or upset inside. We’re obviously human, so it happens. But, everything starts within. So, if you’re like, “You know what, today, I’m not gonna let anything bother me. I’m not gonna let anything trigger my mood,” that’s confidence.  But also, just to have fun, and to love what you do. I love what I do. That’s why I’m so excited to be on this tour. Like I said, it’s my first tour, so going around to the different cities and just enjoying myself and being myself, really, is the important thing.

So, if anything at all, what’s the CRAZIEST thing you’ve experienced on tour thus far?

Nothing extremely crazy so far. Though, a lot of times the meet and greets can get a bit hectic. We now have security to kind of regulate it. But at some points it has been really crazy to where some people get like right here *waves hand inches from nose* in my face. I never have an issue staying as long as I need to to make sure everyone gets photos and say hi to everyone, but sometimes they kind of forget the concept of, uh, (laughs) personal space! The UK songstress continues to tour alongside Kehlani for the SweetSexySavage tour until mid June. Check out some of her work below and you’ll see why’s captivating the hearts of fans worldwide.