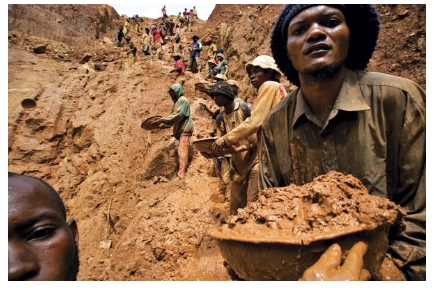 In this day and age, with so many modern strange and interesting news snippets all the time it can be hard to focus in on something that has been around since antiquity. Mining is essentially the pursuit of precious metals and stones. It used to be lapiz lazuli, with decrepit and old tunnels dug beneath the ground that frequently claimed the lives of dozens. Even in recent memory, mining has been dangerous. The mining incident in Chile illustrates as much, with the miner’s quick thinking and rescuers brave attempts the only thing keeping the minors from being entombed. Mining has not let up over recent years, in fact it has only increased. There are all kinds of interesting goings on, especially in Africa.

You may have seen in the news recently an article about a huge diamond being found in Africa. You would think after all these years the mines would be drying up, but they aren’t, and it is a good thing too. Mines employ thousands of people, both skilled and unskilled. In Africa this is important because a good, strong and reliable job is hard to come by. These mines are usually owned by multi millionaires who for the most part run safe and reliable mining operations throughout the world, all they need is a lease from the respective government, power generation services and then some skilled labour to implement the mining facilities, which is nothing to people of such power. It brings money through tax to often impoverished countries and as said, gives people a way of work.

The issue here is corruption. Sometimes the money never really reaches the workers, and they can work in conditions unacceptable in other nations around the world. The type of corruption is explored in many films and documentaries, on both a fictitious and factual scale. An example can be seen with last decade’s blood diamond. Mines make attractive propositions to warlords, often resulting in bloody and deadly battles for control, as has been seen in the Congo.

The term conflict diamond does not come from nothing. Many battles and wars come from the usage of funds from mining. Diamonds are pulled from the ground, cut and made suitable for first world countries where they are bought up for a huge price, often making the middle man rich and leaving the finder of the rock with little of the profit. However, in recent times more respectable mining firms have taken up precedence meaning a fairer deal is sometimes given.

Africa is a troubled continent, one with problems in many of its countries. Mining is a clear way for countries to reap some good money and invest it back into the lives of the people who live there. It is just a shame that it hasn’t happened due to the sheer high levels of corruption that occur throughout. Nothing has changed, conflict and troubles will always follow items of extraordinary wealth, it is just a shame that it is the average African worker that often suffers in the resulting conflict.