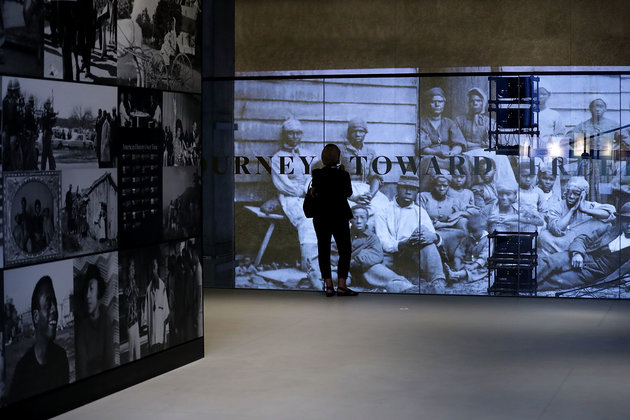 When you step into the elevator on the top floor of the David M. Rubenstein History Galleries, there’s a timeline to your right. It begins with the word “Today.”

Pay attention to it.

As you descend, the timeline will lead you back into history, past President Barack Obama’s 2008 election, through the civil rights movement and Jim Crow. You’ll glide past Reconstruction, the Civil War and the height of African enslavement in the New World. Soon, the elevator will reach its destination: the belly of the National Museum of African American History and Culture.

On Wednesday, journalists who flooded into the 400,000-square foot edifice, designed to resemble a three-tier corona found in Yoruban art, got a sneak peek at the museum’s galleries ahead of the Sept. 24 grand opening.

“As the story unfolds in history, you emerge into a larger space and you ascend up a ramp system as you take in the different elements of history,” he went on. “In that way, we’re helping to choreograph the telling of that story.”

Near the entrance of “Slavery and Freedom,” you’ll read about the hellish Middle Passage. Once you finish, you should walk through the door to your right. You’ll enter a recreation of the Sao Jose, a slave ship that sank off the coast of Cape Town, South Africa, in 1794. The captain and his entire crew were rescued, along with half the enslaved Africans onboard. As you stand in the bowels of the ship, keep in mind that 212 black lives were lost and the survivors were resold on the Western Cape. Remember that the human beings who lived that day were only saved because of their monetary value to white men.

You’ll pass by exhibits explaining the Trans-Atlantic slave trade, where enslaved Africans were stowed like livestock in the bottoms of ships. You’ll see a glass display housing pounds of sugar, and a display honoring Crispus Attucks and other black patriots. Then you’ll walk out of the museum’s deepest pit, into the light, where a statue of Thomas Jefferson and three of his slaves will greet you. Behind Jefferson is a pile of bricks, each with a name emblazoned on it ― one brick for each slave who built Monticello, the former president’s primary plantation. The shackles at the base of the exhibit will catch your eye as Jefferson, who once wrote that “all men are created equal,” gazes off at something on the horizon.

Make your way past a display of various slave codes, which piled extra restrictions onto enslaved Africans in the hopes of preventing a rebellion. You’ll reach the shawl and hymnal of Harriet Tubman, and you’ll chuckle once you realize why the museum’s curators have chosen to evoke her at this particular point.

Go up a ramp, past a mural of a cotton field dotted with workers, and you’ll find a gallery dedicated to the post-Emancipation period ― a time when black people were freed from chains only to find themselves, in many cases, bound by nooses. “Defending Freedom, Defining Freedom: Era of Segregation 1876-1968” shows the violence, as well as the prosperity, of black life after enslavement.

A statue of U.S. Rep. Robert Smalls (R-S.C.), who was born into slavery and served in Congress during the Reconstruction era, greets you here. Blackface figurines sit in glass cases next to in-depth explanations of minstrelsy. Descriptions of Jim Crow, lynchings and Klan hoodies punctuate a larger narrative of progress ― such as the founding of historically black colleges and universities and the political activism of black women.

As you walk up a ramp to the final gallery, “A Changing America: 1968 and Beyond,” you’ll see a photo of Obama’s inauguration. You’ll think of your great-grandmother, and how much she loved that skinny kid with the funny name. Then you’ll turn the corner and continue on through history.

This gallery moves fast. The bravery of Rep. John Lewis (D-Ga.) and a dress made by the courageous Rosa Parks share space with a shard of stained glass from the bombed 16th Street Baptist Church. You’ll be awestruck by the gutsy Anita Hill, who stood up for sexual assault victims ― especially black women, who are less likely to report their sexual assaults than any other demographic ― in her testimonyagainst aspiring Supreme Court Justice Clarence Thomas in 1991. The beating of Rodney King by Los Angeles police officers is also here, as is the gross government negligence before and after Hurricane Katrina. You’ll read about Trayvon Martin’s death and the rise of Black Lives Matter. And finally, you’ll see memorabilia from Obama’s presidency.

Traveling through the museum, you’ll be confronted, at every turn, with the realities of black struggle, black strength and black excellence. At a moment when some people seem openly committed to the idea of making the U.S. into a whites-only lunch counter, you must realize how vital it is that a place like this exists. No one who visits this museum can fail to understand that black people have been a part of America every step of the way, helping to make this country what it is.

A quote from the late poet Langston Hughes ― “I, too, am America” ― is the last thing you’ll see as you exit the galleries. And the only thing you’ll hate about the museum is that your great-grandmother didn’t get to see a building molded in her regal image and built in honor of her ancestors.