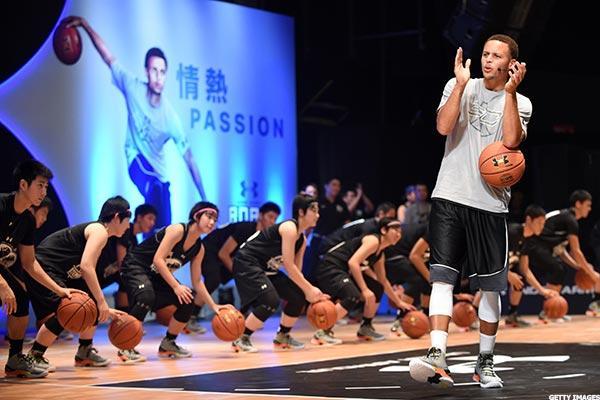 Under Armour,  (UA) along with the company’s biggest basketball star Steph Curry, have set its sites on Asia. Curry, sometimes referred to as “The Chef,” is touted for his ability to cook up some of the most incredible shots on a basketball court and Under Armour is hoping to leverage “The Chef” in the Chinese market.

For the past week Under Armour and Curry have been touring Southeast Asia in an attempt to grab a foothold in one of the world’s biggest markets for basketball.CNBC‘s Sara Eisen appeared on this morning’s “Squawk Box” from Taipei to report on the company’s efforts in the region.

“Southeast Asia is the new frontlines for the global sneaker wars. The battle of consumers isn’t playing out on the NBA courts at home, it is playing out in smaller gyms like here in Taipei,” Eisen said.

However, while Under Armour is still in the beginning stage of infiltrating the Asian market, Nike (NKE) has had a presence in the region for the better part of the last decade. Eisen sat down with Under Armour CEO Kevin Plank to ask how challenging cracking the Chinese market will be.

“When you think about China you can’t think about it in terms of this year or next year, the next three years even. It’s really a 20-year approach to plan and it’s got to be something where you’re leaving China with more than you’re walking in with, just thinking you’re going to pull revenue out of the market,” Plank explained.

Another challenge facing Under Armour is Steph Curry’s global popularity. ESPN recently compiled a list of the most popular global athletes based on things like marketability and sales. Cracking the top-10 were NBA players LeBron James (2), and Kevin Durant (6), while Curry was listed at 34.

However, per Eisen, the fans in Asia went “wild” for Curry. Perhaps Under Armour, whose stock has slid this year, can leverage this Curry strategy in Asia as a catalyst for the stock’s performance.

Shares of Under Armour were higher during early-morning trading on Wednesday.

Load More... Follow on Instagram
Tiger Woods Announces Return to Golf
Ford and the NFL Partner Up to Celebrate the New Season
To Top