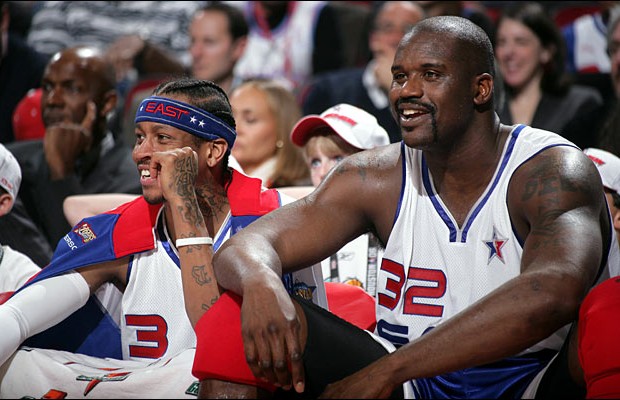 Shaquille O’Neal joined Yao Ming and Iverson in being named to the Hall of Fame on Monday.

O’Neal won three titles while manning the paint as a Los Angeles Laker. Starting his career in Orlando, the center made it to the Finals in just his third year as a pro before moving on to California. He paired with Kobe Bryant to take Los Angeles to four Finals overall prior to being traded to Miami. Teaming with Dwyane Wade, O’Neal won a title in 2006.

Famously, he sparred with O’Neal’s Lakers in Los Angeles’ 2001 Finals title defense. In a weakened Eastern Conference, his Philadelphia 76ers should have acted as championship contenders each year, but the top-heavy design of his team’s makeup and Iverson’s own off-court habits led to other rivals assuming the throne.

After an endless series of trades bent on providing Iverson with a fellow superstar to run with, the Sixers gave up on the practice after Iverson walked out on the team in Dec. 2006. He was later dealt to Denver, where he worked for nearly two years prior to a swap with the Detroit Pistons. A poorly-conceived comeback attempt in Memphis came before a botched return in Philadelphia to round out Iverson’s pro career.

Load More... Follow on Instagram
The Final Four is Set and The Stakes Are Raised in March Madness
[Sports News] Villanova Wins NCAA Men’s Championship with Buzzer-Beater
To Top