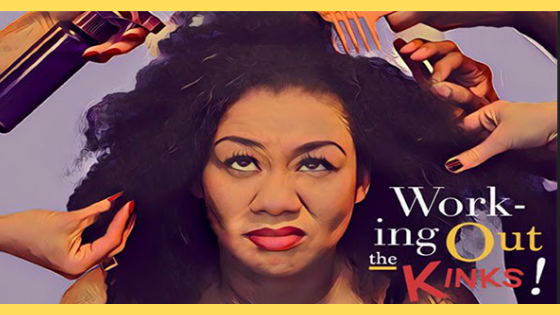 Official Press Release:
New York, NY  – Season two of the award winning digital series, “Working Out The Kinks” is now available on YouTube. Working Out the Kinks is a smart and sassy, yet down-to-earth comedy. The series focuses on the rapidly growing natural hair movement and highlights how the careers, love life, and identity of African  American women are shaped and directly influenced by their hair. Citing inspiration from shows like “Girlfriends” and “Living Single”, the show is truly something all its own.

This season, the digital series will continue to follow Jada, and her over-the-top group of friends as they encounter situations such as people who don’t quite understand Jada’s hair and how it works to having to change her hair due to stigmas at work.

In addition,  other moments like what happens when someone touches her hair and the reactions
that come with this curiosity are captured.  “Working Out The Kinks” will be screening at the New Jersey Natural Hair Festival on Sept. 29th and at the Queen City Film Festival on Oct. 26th.

J Nycole Ralph is the Creator and Executive Producer of “Working Out the Kinks”. She is a critically acclaimed actress, who plays Jada in the sassy series. J Nycole Ralph started performing in The Book of Mormon on Broadway in NYC and is now a cast member in the Broadway touring production! She’s also a critically acclaimed actress known for her roles as Consuela and Anita in the Broadway tour of West Side Story directed and choreographed by Broadway creative team David Saint and Joey McKneely, respectively. Joey says “It was a pleasure” working with J Nycole. Yaaaasss!

Other work includes Chris Rock’s film, Top Five; Finding Magic, Finding Joy, Finding Trust with Yara Shahidi and Essence Atkins; and Best Supporting Actress (Broadway World) performance in Smokey Joe’s Cafe. J Nycole has worked with Whoopi Goldberg, Jerry Seinfeld, Adam Sandler, Chris Rock, Rosario Dawson, Leslie Jones, Ruby Dee, Billy Dee Williams, and Tommy Ford, to only name a few. J Nycole Ralph is the co-founder of a theater company called “Laugh With You”, which was one of the few theater companies that not only paid their actors and playwrights within the first year, but also celebrated profits within that first year. J Nycole has also
performed on shows televised on ABC, NBC, and BET.

Error: Access Token is not valid or has expired. Feed will not update.
Before Choosing A Shipping Carrier For Your Business, Consider These Essentials
How Businesses are Using Technology as Their Recipe for Success in 2021
To Top