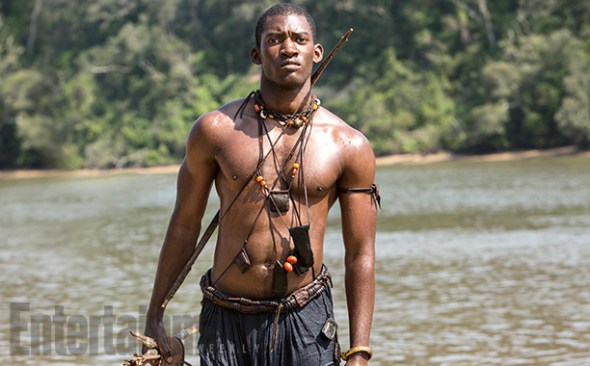 Giving up has never been in Kunta Kinte’s blood, and it seems his daughter has taken on his fighting spirit in Part 2 of Roots.

It’s been 10 years since we last saw Kunta, and in that time he was always looking for a way to run away from his plantation. He may have been beaten momentarily, but he was never broken.

Kunta had successfully managed to escape for a short while after killing the overseer.

Something we didn’t know from the last production of Roots is that British soldiers offered Kunta help in escaping his plantation after he offered to fight for their side in the Revolution. He was taken to a camp where he met up with other escaped slaves and Native Americans that had also agreed to fight.

During his first night in the camp, he met another escapee named Carlton and quickly formed a bond with him. When they were sent into battle with nothing more than pikes to battle American rebels armed with guns, he brought Carlton along to help him fight. Sadly, Carlton did not survive the night.

Kunta commandeered a canoe, and made his way up the river overnight. On his way upstream the next morning, he passed another plantation and slaves saw him passing by. They bid him farewell with a negro spiritual, so that overseer wouldn’t be alerted to his presence.

He didn’t make it much farther, though, because when he docked, he ran into a gang of bounty hunters. He was a wanted man who came with a high reward. Before they carted him back to Waller’s plantation, they cut off his foot–as has been requested in his Wanted poster. He was tied to a tree, and everyone knows what was coming next.

Just like with his whipping at the end of the last part, viewers couldn’t look away. Cameras didn’t spare the audience as the bounty hunter’s axe came down on his foot and chopped off his toes.

After a fever dream sequence, Kunta woke up to a beautiful woman named Belle beaming over how happy she was that he was going to make it. Belle, by the way, was wearing a scarf that was the same shade of blue that his people in Juffure wore. All he wanted was to die. He refused her help in healing because he no longer had the desire to survive.

As much as she tried to keep an upbeat demeanor while she tended to his wound, she eventually got fed up with him. And that was enough to set off Fiddler, who had also been brought to Dr. Waller’s plantation. He dragged Kunta out to the horse pen and forced him to get up on his own despite his injury and walk up to the house so that he could apologize to Belle.

Eventually, he and Belle got back on good terms, and she got him as job as Dr. Waller’s driver after he managed to calm an escaped horse. Most people in the animal’s path ran away, but Kunta faced it down, asking him, “Why are you running so fast? All you’ll find is trouble.” Dr. Waller was thoroughly impressed and gave him a promotion. It was now Kunta’s job to cart the doctor to and from all of his appointments.

While driving Dr. Waller back from a house call one afternoon, they came across White people in the town that were celebrating the news that America had won their freedom from Britain. “We’re free,” they shouted joyfully in the streets all while ignoring the fact that the were still enslaving an entire race of people. Well…that’s privilege for you.