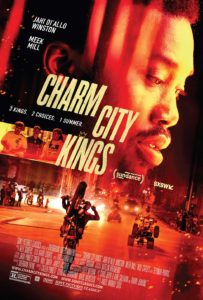 The one truth Mouse knows is that he loves the power, artistry and energy of “The Ride” — the exhilarating motorized-dirt-bike scene that is both pastime and passion on the streets of Baltimore. During one eventful summer, Mouse steers his way through two father figures, a first girlfriend, the pull of illegal choices and the thrill of stunt-riding that makes him and his friends feel like CHARM CITY KINGS.

CHARM CITY KINGS will debut at the 2020 Sundance Film Festival, followed by a release in NY/LA/Baltimore on April 10th and nationwide April 17th 2020.