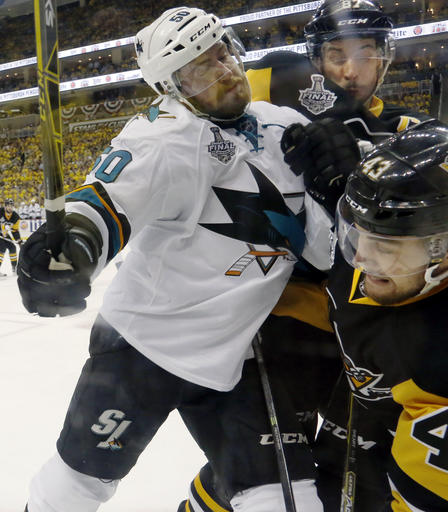 The San Jose Sharks can take at least one positive out of losing the first two games of the Stanley Cup Final in Pittsburgh.

Despite being severely outplayed for almost the entire two games, the Sharks still managed to lose by only one goal with the game-winner coming in the final three minutes of Game 1 and in overtime in Game 2.

If the Sharks can somehow neutralize Pittsburgh’s decided edge in speed and get back to playing the style of play that got them this far for the first time ever they might be able to get back into the series when it shifts to San Jose for Game 3 on Saturday night.

The Sharks will have last change and a loud crowd behind them for the first Stanley Cup Final game ever in San Jose.

“We expect a really hard start and a good team,” Penguins forward Nick Bonino said. “These last two games have been decided very late, each one. They’re a great team. They’re going to come out really hard and we’ll have to match that.”