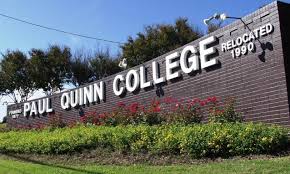 College officials say the gift will help finance construction of the first new building on the campus in almost 40 years, and to fund the college’s transition as the nation’s first historically black work college.

“We at the Harold Simmons Foundation are very happy to be a part of the Work College Program at Paul Quinn College,” said Foundation President Lisa Simmons. “This innovative model takes up the national challenge to prepare students for successful work lives without the burden of crushing debt that puts so many dreams out of reach. The Harold Simmons Foundation is proud to invest in Paul Quinn because it is an institution leading the way.”