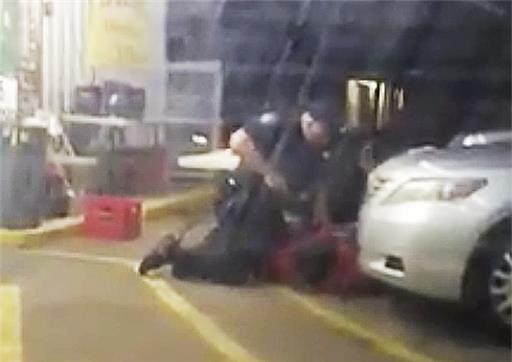 The U.S. Justice Department opened a civil rights investigation Wednesday into the videotaped police killing of a black man who authorities say had a gun as he wrestled with two white officers on the pavement outside a convenience store.

Alton Sterling, 37, was confronted by police and shot on Tuesday after an anonymous caller said he had threatened someone with a gun outside the store, where he was selling homemade CDs, authorities said.

In a cellphone video taken by a community activist and posted online, the two officers pinned Sterling to the ground, someone yelled, “He’s got a gun! Gun!” and gunfire erupted moments later.

At a news conference Wednesday, Baton Rouge Police Chief Carl Dabadie Jr. said that Sterling was armed but that there are still questions about what happened.

“Like you, there is a lot that we do not understand. And at this point, like you, I am demanding answers,” Dabadie said, calling the shooting a “horrible tragedy.”

The officers, identified by the chief as Blane Salamoni, a four-year member of the department, and Howie Lake II, who has been on the force for three years, were placed on administrative leave, standard department procedure. Authorities would not say whether one or both fired their weapons or how many times.

“I have very serious concerns. The video is disturbing, to say the least,” Edwards said.

“Mr. Sterling was not reaching for a weapon. He looks like a man that was actually fighting for his life,” said state Rep. Edmond Jordan, an attorney for Sterling’s family.

Quinyetta McMillon, the mother of Sterling’s teenage son, trembled as she read a statement outside City Hall, where a few dozen protesters and community leaders had gathered. Her son, Cameron, 15, broke down in tears and was led away as his mother spoke.

She described Sterling as “a man who simply tried to earn a living to take care of his children.

“The individuals involved in his murder took away a man with children who depended upon their daddy on a daily basis,” she said.

The police chief urged protesters to remain peaceful, and Mayor Kip Holden likewise sought to ease tensions, saying, “We have a wound right now, but we’ll be healing and making this city and parish whole again.” Actress @issarae from Youtube series: Awkward Black Girl started a scholarship fund for #AltonSterling 5 children. It had a goal of $40,000 yet reached over $300,000 in it’s first day.