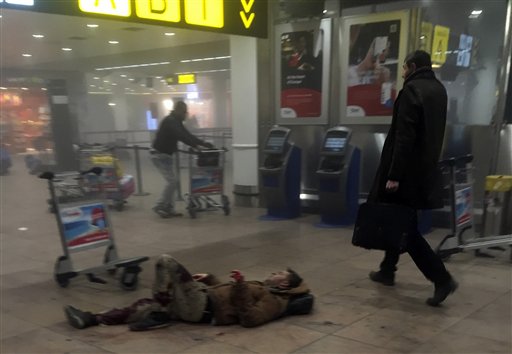 Bombs exploded Tuesday at the Brussels airport and in the city’s subway, killing at least 31 people and wounding dozens, as a European capital was again locked down amid heightened security threats. The Islamic State group claimed responsibility for the attacks.

The two airport blasts, at least one of them blamed on a suicide bomber, left behind a chaotic scene of splattered blood in the departure lounge as windows were blown out, ceilings collapsed and travelers streamed out of the smoky building.

About an hour later, another bomb exploded on a rush-hour subway train near the European Union headquarters. Terrified passengers had to evacuate through darkened tunnels to safety.

“What we feared has happened,” Belgian Prime Minister Charles Michel told reporters. “In this time of tragedy, this black moment for our country, I appeal to everyone to remain calm but also to show solidarity.”

Belgium raised its terror alert to the highest level, diverting planes and trains and ordering people to stay where they were for most of the workday. Airports across Europe immediately tightened security.

“We are at war,” French Prime Minister Manuel Valls said after a crisis meeting in Paris. “We have been subjected for the last few months in Europe to acts of war.”

Added French President Francois Hollande: “Terrorists struck Brussels, but it was Europe that was targeted, and it is all the world which is concerned by this.”

European security officials have been bracing for a major attack for weeks, and warned that the Islamic State group was actively preparing to strike. The arrest Friday of Salah Abdeslam, a key suspect in the November attacks in Paris, heightened those fears, as investigators said many more people were involved than originally thought and that some are still on the loose.

The Islamic State group claimed responsibility for the Brussels attacks, saying in a posting on the group’s Amaq news agency that its extremists opened fire in the airport and “several of them” detonated suicide belts. It said another suicide attacker struck in the subway.

The posting claimed the attack was in response to Belgium’s support of the international coalition arrayed against the group.

Police found and neutralized a third bomb at the airport once the chaos after the two initial blasts had eased, said Florence Muls, a spokeswoman for the airport told The Associated Press. Bomb squads also detonated suspicious objects found in at least two locations elsewhere in the capital, but neither contained explosives, authorities said.